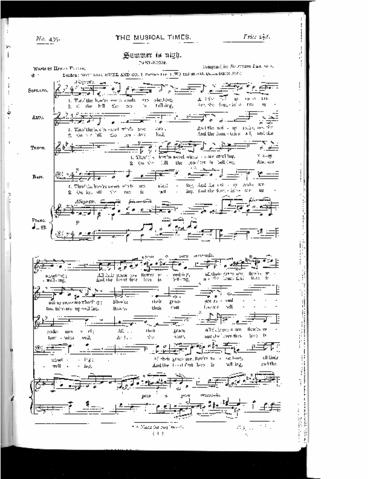 Conductor and composer Sir Julius Benedict was born in Stuttgart, the son of a wealthy banker. He learnt composition in Weimar and Dresden and was appointed Kapellmeister of the Kärnthnerthor theatre at Vienna in 1823. Two years later he became Kapellmeister of the San Carlo theatre at Naples where he produced his first two operas. In 1834 he went to Paris, leaving the next year for London, where he spent the remainder of his life.

Benedict was given the conductorship of an operatic enterprise at the Lyceum Theatre in 1836 and he brought out a short opera previously given in Naples. He became conductor of the English opera at Theatre Royal, Drury Lane and produced several of his own operas and conducted Felix Mendelssohn's Elijah at Exeter Hall, for the first appearance of Jenny Lind in oratorio. In 1850 he was the accompanist and conductor on Lind's tour of America. On his return he became musical conductor at Her Majesty's Theatre (and afterwards at Drury Lane), and conductor of the Harmonic Union. His best-known opera, The Lily of Killarney, was produced at Covent Garden and his operetta The Bride of Song was introduced there.

Benedict wrote a march for the wedding of Albert Edward, Prince of Wales and Alexandra of Denmark in 1863. Graziella, a cantata, was given at the Birmingham Festival of 1882, and was later produced in operatic form at the Crystal Palace.

Benedict conducted every Norwich Festival from 1845 to 1878 inclusive, and the Liverpool Philharmonic Society's concerts from late 1875 to 1880. He was the regular accompanist at the Monday Popular Concerts in London from their start, and acted as conductor of these concerts. In 1871 he was knighted, and in 1874 was made knight commander of the orders of Franz Joseph I of Austria and Frederick I of Württemberg. In 1884, friends set up a benefit fund to aid him financially. He died in London on 5 June 1885.

A selective list of his orchestral works includes 13 works, 7 choral and vocal works, 8 operatic works and 5 other compositions.