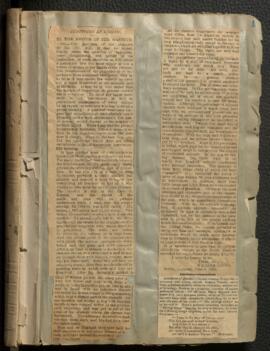 Fonds consists of Fenwick's scrapbook which contains newspaper clippings and some of his letters to the editor on topics ranging from medicine to general interest to humour. Five letters from medical conferences in Québec and Ontario, as well as some engraved portraits of medical men are also included.

The McGill Group in Medical Genetics Oral Histories Collection documents the history of the McGill Group in Medical Genetics, active 1972 to 2009, through fourteen oral histories with the group's members. The Collection contains transcripts in English and in French translation of oral history interviews conducted with the members of the McGill Group in Medical Genetics between 2009 and 2011. The oral history interviews were held in the course of a larger project conducted by a group of researchers at McGill's School of Social Studies of Medicine to document the history of the group and its role in the development of the field of medical genetics in Canada more broadly. These researchers included Christopher Canning, Andrea Tone, George Weisz, and Alberto Cambrosio. The project received guidance from David Rosenblatt and funding from the Canada Research Chair Program in the Social History of Medicine. The fourteen interviews document the members' individual biographies and careers, as well as the history and development of the McGill Group in Medical Genetics during a transformative period in the field of medical genetics. The interviews are available as transcripts, created by Christopher Canning. French translations of the transcripts were also created by McGIll's Translation Services and are also made available. The following individuals were interviewed as part of the oral histories project:

Tobin's papers consist of a scrapbook and photo album containing programmes, menus and newspaper clippings concerning the "King Cook" celebrations, 1911-1927, newspaper obituaries and photographs of Medical Faculty professors, programmes for social events of the Medical Society, Pharmaceutical Society and the McGill Employees Association (of which Tobin was secretary) and letters of recommendation from the Medical Students Society, 1921-1931.

The collection contains private records and papers relating to the medical and teaching career of Maude Abbott. It consists in large part of correspondence, 1894-1920, including family correspondence with, among others, her sister Alice Abbott, 1904-1919, and her brother Rev. Harry M. Babin, 1916-1920. Also included are manuscripts and drafts of articles and addresses; case reports; post-mortem records; glass slides and drawings; exhibit panels largely pertaining to her research on congenital heart disease; programmes of medical meetings, 1902-1937; reprints and papers relating to the history of medicine in Montreal and Quebec, as well as to the history of McGill, 1829-1936. In addition, there are photographs, some poems, an autobiographical sketch and a printed copy of her Classified and Annotated Bibliography of Sir William Osler's Publications, 1939, with corrections and annotations by W. W. Francis. Fonds also includes a draft of Abbott's letter to the Dean of Faculty of Medicine, McGill University, regarding admission (1889).

The fonds illustrates Dr. McNaughton’s work as a neurosurgeon and consists of correspondence, letters, articles, newspaper clippings, obituaries, photographs, slides, research material and notes, course material, annual reports and drafts of his work. The fonds is divided into three (3) series.