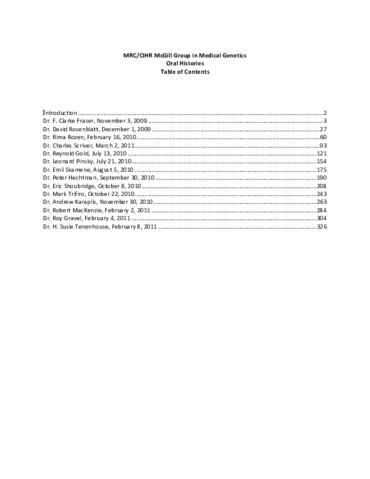 McGill Group in Medical Genetics was formed in 1972 and was supported through funding by the Medical Research Council and subsequently by the Canadian Institutes for Health Research (CIHR) until 2009. The group originally formed in 1972 under the primary direction of Dr. F. Clarke Fraser and Dr. Charles Scriver and at the recommendation of Malcolm Brown, President of Canada’s Medical Research Council. During the latter half of the 20th century, medical genetics was a coalescing field, the development of which progressed rapidly during the 1960s and 1970s as clinicians sought to apply research into chromosomal abnormalities and biochemical genetics to the care and counseling of individual patients. The fourteen members of the McGill Group in Medical Genetics were: F. Clarke Fraser, Charles Scriver, Rima Rozen, David Rosenblatt, Reynold Gold, Leonard Pinsky, Emil Skamene, Peter Hechtman, Eric Shoubridge, Mark Trifiro, Andrew Karaplis, Robert MacKenzie, Roy Gravel, and Susie Tenenhouse. They represented medical specializations including teratology, biochemistry, population genetics, and endocrinology. Group members produced over 1,400 articles during the course of the group's history.

Deposited with the Osler Library of the HIstory of Medicine by Andrea Tone in 2021.

The McGill Group in Medical Genetics Oral Histories Collection documents the history of the McGill Group in Medical Genetics, active 1972 to 2009, through fourteen oral histories with the group's members. The Collection contains transcripts in English and in French translation of oral history interviews conducted with the members of the McGill Group in Medical Genetics between 2009 and 2011. The oral history interviews were held in the course of a larger project conducted by a group of researchers at McGill's School of Social Studies of Medicine to document the history of the group and its role in the development of the field of medical genetics in Canada more broadly. These researchers included Christopher Canning, Andrea Tone, George Weisz, and Alberto Cambrosio. The project received guidance from David Rosenblatt and funding from the Canada Research Chair Program in the Social History of Medicine. The fourteen interviews document the members' individual biographies and careers, as well as the history and development of the McGill Group in Medical Genetics during a transformative period in the field of medical genetics. The interviews are available as transcripts, created by Christopher Canning. French translations of the transcripts were also created by McGIll's Translation Services and are also made available. The following individuals were interviewed as part of the oral histories project:

Files are arranged in chronological order by date of interview.

Copies of original born-digital annotated Word documents created in MS Word during the translation and revision process have also been preserved by the library.

Title and table of contents give date of Dr. Charles Scriver's interview as March 2, 2011, but text of transcription indicates that the date was March 2, 2010.