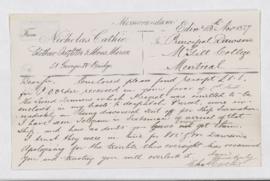 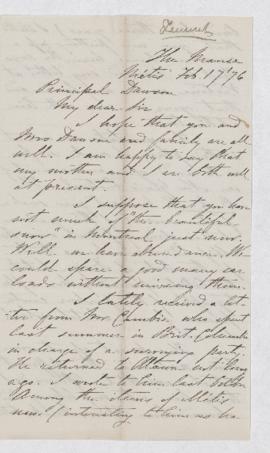 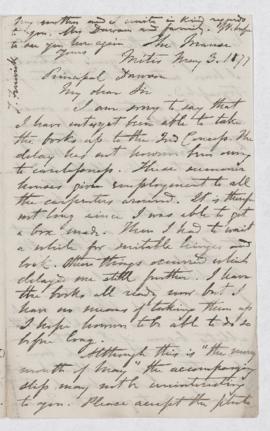 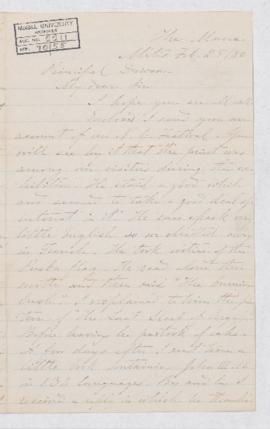 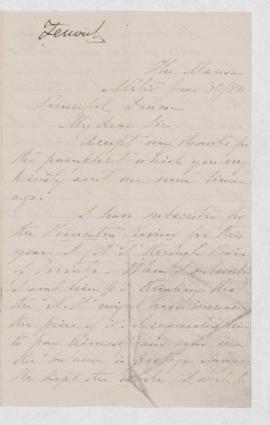 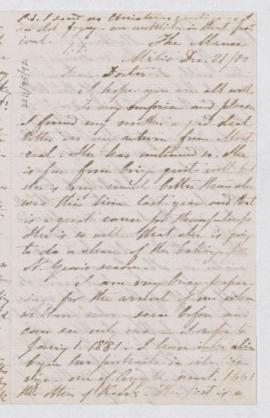 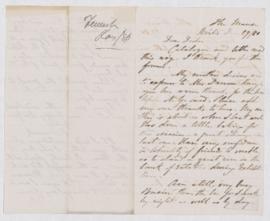 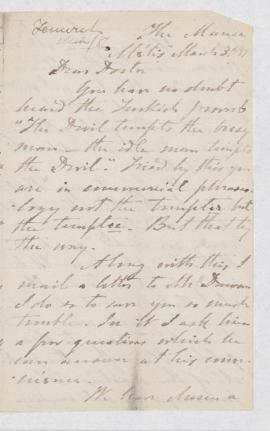 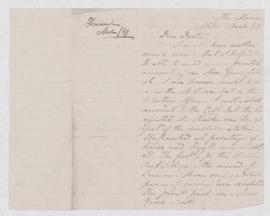 William Dawson, geologist, educator and Principal of McGill University (1855-1893) was an important scientific figure in nineteenth-century Canada, and one of the few of truly international stature. Born and educated in Pictou, Nova Scotia, he early showed a predilection for geology and palaeontology, and began collecting fossil plants from the coal fields in the Pictou area. During a period of study in Edinburgh in 1840-1841, he formed important friendships with Sir Charles Lyell, one of the pioneers of modern geology and with William Logan, shortly to become the first director of the Geological Survey of Canada. On his return to Nova Scotia, he began to publish and lecture on scientific topics. An appointment as Nova Scotia's first Superintendent of Education (1850-1853) entailed the extensive travel which enabled him to gather material for his Acadian Geology. In 1854, in the midst of his unsuccessful application for the chair of Natural History at Edinburgh, Dawson was offered the Principalship of McGill. He found the University on the verge of financial collapse. By a combination of scientific and entrepreneurial talents, he established it on a very sound footing and stamped it with a particularly scientific character. As a scientific educator, Dawson was highly progressive, and introduced a wide range of subjects into the undergraduate curriculum. His belief in the alliance of scientific and commercial concerns, seconded by the financial support of Sir William Macdonald, launched McGill's innovative programmes in applied sciences. However, on the question of the higher education of women, his stance against co-education generated much controversy. In his early years at McGill, Dawson taught almost all the sciences; later, as Logan Professor, he could concentrate on his main fields of geology and palaeontology. His early researches in the Maritimes leaned towards palaeobotany, but were also closely connected with iron and coal mining. Following the move to Montréal, his interests shifted to the Laurentian region and fossil fauna; he was deeply embroiled in the controversy over Eozoon canadense, whose zoological origins he championed. Apart from his extensive scholarly writings, Dawson published many popular works, particularly on the relations of science and religion. He himself was deeply fundamentalist and a vigorous opponent of Darwinism. As time passed, Dawson's research yielded to his involvement in scientific administration. He was the first president of the Royal Society of Canada (1882), the first to serve as president of both the American (1882-3) and the British Association for the Advancement of Science (1886), and a fellow of numerous other learned societies. He was knighted in 1884, following the Montréal meeting of the BAAS which he organized. Dawson married a young Margaret Ann Young Mercer, whom he met in Scotland and brought over to Canada, in 1848. The couple had six children, with five surviving to adulthood.

This series includes John William Dawson's papers, which are chiefly scientific and scholarly in character, with some materials reflecting other aspects of Dawson's career, particularly educational work and religious controversy.

Originally received as many smaller accessions, the correspondence has been arranged in chronological order and is indexed by author/recipient as well as by date. The lectures, scrapbooks and other papers are also listed as files.