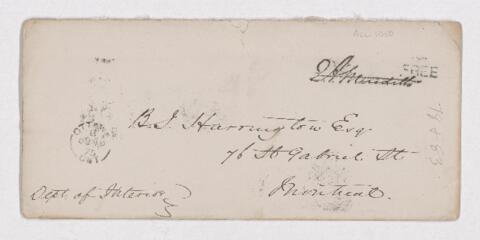 Letter from E. A. Meredith to B.J. Harrington.

He was a lawyer and office holder. His father died suddenly in 1819. His mother remarried and left for Canada, leaving Edmund with his uncle. In 1833, he entered the Trinity College, Dublin, and after graduating (B.A., 1837), he entered Lincoln's Inn, London, and then King's Inns, Dublin, to study law (LL.D.). In 1842, he moved to Canada to rejoin his family, living first in Toronto and then in Montreal. Called to the Irish bar in 1844, he did not practise law. In 1846, he was appointed to the unpaid and part-time position of the 3rd Principal of McGill College (1846-1853). In 1847, he joined the civil service and moved with the government to Quebec City, becoming Under Secretary of State for Canada in Sir John A. Macdonald's government. When the new capital, Ottawa, was founded in 1865, much to his disappointment, he and the rest of the government were forced to move there. In 1873, he became deputy minister of the new Department of the Interior. He founded the Ottawa Art Association, served as President of the Literary and Historical Society of Quebec, the Park Lawn Tennis Club (Toronto), the Civil Service Board, the Ottawa Literary and Scientific Society, Vice-President of the Astronomical and Physical Society of Toronto, and finally the part-time position in retirement as Vice-President of the Toronto Loans and Assurance Company. He was awarded an honorary M.A. degree from Bishop's University, and that of LL.D. from McGill University. He was an honorary member of the American Association for the Promotion of Social Science.