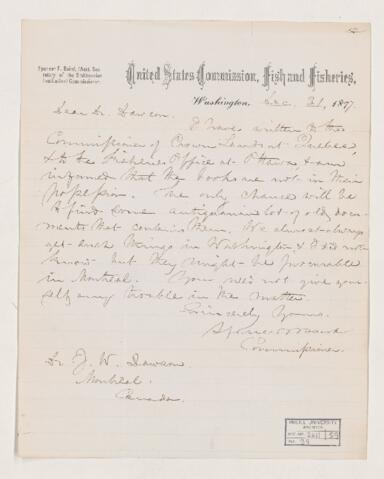 Spencer Fullerton Baird was born on February 3, 1823, in Reading, Pennsylvania.

He was an American naturalist, ornithologist, ichthyologist, herpetologist, and museum curator. In 1840, he graduated from Dickinson College in Carlisle, Pennsylvania where he also became a professor of natural history in 1845. In 1850, he became the first curator at the Smithsonian Institution and the Permanent Secretary for the American Association for the Advancement of Science. He created a museum program for the Smithsonian, focused on the natural history of the United States. Eventually, he became its Assistant Secretary and in 1856, he received his Ph.D. in physical science from Dickinson College. In 1872, he became the manager of the United States National Museum. In 1878, he became the second Secretary of the Smithsonian and in 1880, he was elected a member of the American Antiquarian Society. He published "Birds" (1858), "Mammals of North America" (1859), and "History of North American Birds" (1875 to 1884).

There are two birds named after him - Baird's sparrow, a migratory bird native to Canada, Mexico, and the United States, and a medium-sized shorebird known as Baird's sandpiper. Baird Auditorium in the Smithsonian National Museum of Natural History is also named in his honour.