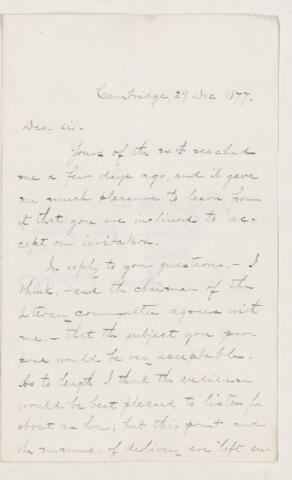 He was a philologist, educator, and administrator. At his father's request, he first studied economics at Haverford College (B.A., 1860; M.A. 1863) to become an entrepreneur. He soon developed a distaste for commerce and enrolled at Harvard for a second undergraduate degree in ancient history (B.A., 1863). He began to teach classics and mathematics at Haverford in 1863. In 1865, he travelled to Europe (Greece, Italy, and Germany) and studied for a year at the University of Göttingen. In 1873, he was appointed Assistant Professor of Greek and Latin at Harvard and became a Pope Professor of Latin in 1901. He also served as Dean of Harvard College (1882-1891) and Dean of the Faculty of Arts and Sciences (1898-1902). Haverford College awarded him an honorary degree of LL.D. in 1888. In 1897/1898, Smith served as director of the American School of Classical Studies in Rome, and in 1898, he became president of the American Philological Association. He was co-editor of the College Series of Latin Authors, for which he prepared Odes and Epodes of Horace (1894).