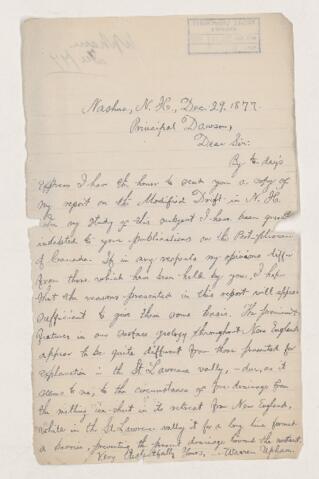 He was an American geologist, archeologist, and librarian. He graduated from Dartmouth College (B.A., D.Sc.) in 1871. Upham worked as an assistant geological surveyor in New Hampshire (1875-1878) before moving to Minnesota in 1879 to study its resources and glacial geology. He became associated with the U.S. Geological Survey in 1885 and remained with this organization until 1895 when he became secretary and librarian of the Minnesota Historical Society. He is best known for his work on Lake Agassiz, "The Glacial Lake Agassiz" (1895). The Minnesota Historical Society published his landmark 735-page volume on place name origins, “Minnesota Geographic Names: Their Origin and Historic Significance” (1920). He was also an editor of the Minnesota Historical Society's collection from 1898 to 1920 and contributed articles on geology and Minnesota history to various journals and magazines. He was a Fellow of the American Association for the Advancement of Science, a member of the American Academy of Arts and Sciences, the Geological Society of America, Victoria Institute of London, the Minnesota Academy of Natural Sciences, Boston Society of Natural History, Archeological Institute of America, and a member of the American, Minnesota, New Hampshire, and Mississippi Valley Historical Associations. Glacial Lake Upham in central Minnesota is named in his honour.