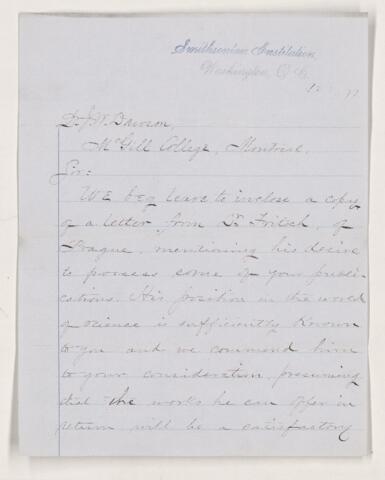 He was an American scientist, educator, and the first Smithsonian Secretary (1846-1878). In 1819, he entered The Albany Academy, where he was given free tuition. Here Henry worked as both a chemical assistant and lecture preparer. In 1826, he was appointed a Professor of Mathematics and Natural Philosophy, and it was here that he began his scientific research on electromagnetism and worked on the development of the telegraph. In 1832, Henry was named Professor of Natural History at the College of New Jersey (now Princeton University), and his tour of European scientific centers in 1837 established his international reputation in science. His achievements as both an educator and scientist made him a prime candidate for the position of Smithsonian Secretary in 1846. Despite the challenges of the Civil War, he focused the Smithsonian on research, publications, and international exchanges. By 1849, he created a program to study weather patterns in North America, a project that eventually led to the creation of the National Weather Service. In 1852, he became a member of the U.S. Lighthouse Board, becoming its chairman in 1871, a position he held until his death. He was elected a member of the American Philosophical Society in 1835 and the American Antiquarian Society in 1851. In 1915, Henry was inducted into the Hall of Fame for Great Americans in the Bronx, New York.