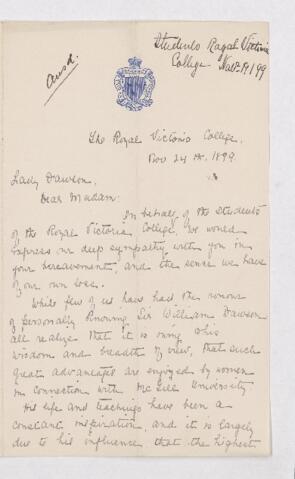 In 1899 the Royal Victoria College opened as a McGill residential college for women with Hilda Diana Oakeley, a British philosopher, educationalist and author, as the head. It was named in honour of Queen Victoria. At the opening of the building, a statue of the Queen, executed by Princess Louise, was presented to the College and today still sits enthroned on the steps of Strathcona's building.
The original, central edifice, named the Hurlbatt Wing after the College's first warden, is of the British chateau style. Its five storeys crowned by many gables and dormers still create a fine facade on Sherbrooke Street. The building is decorated by many carvings that refer both to wisdom and to its namesake, the Queen.
Until the 1970s, all female undergraduate students, known as "Donaldas" (after the first name of Lord Strathcona), were considered to be members of the Royal Victoria College. Beginning in the autumn of 2010, its newer Tower section became a co-ed dormitory, whereas the older West Wing remains strictly for women. Both the Tower and the West Wing of Royal Victoria College form part of the university's residence system.