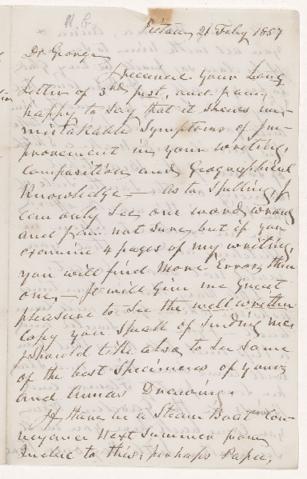 James Dawson was a Scottish immigrant to Pictou, Nova Scotia. Born in 1789 in Overtown, Banffshire, Scotland, he emigrated to Canada in 1811. He married Mary Rankine over Lonerig, Scotland, in 1818. Their son, John William (called William) became a well-known Canadian geologist and McGill University principal. At one time a successful merchant, shipowner, stationer, and shopkeeper, James Dawson found himself in severe financial difficulty due to a depression in the mid-1820s and accidents to several of his boats. Archival records attest to several investment attempts. Despite his failure as an investor, James Dawson re-established himself as a successful bookseller, stationer, and printer by the 1840s. A devout Presbyterian, James Dawson was involved with various Bible and Christian missionary societies, as well as the temperance movement.