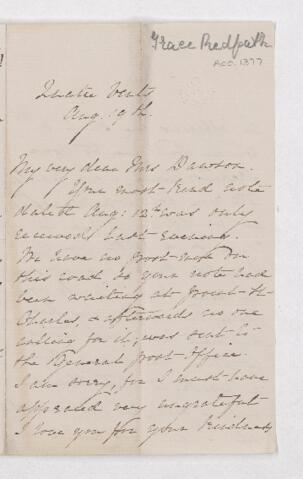 Grace was the daughter of Manchester woolen merchant and philanthropist William Wood. In 1847 she married Montrealer Peter Redpath, son of a Scot who had immigrated to Canada and built a successful sugar refining business. Peter met Grace in Manchester where he had been sent to train his business skills and was employed by Grace’s father. The couple returned to Montreal where they lived till 1879. Peter became president of John Redpath & Son and a director of the Bank of Montreal as well as a member of the Montreal City Council. He also was a member of the McGill University Board of Governors from 1864 until his death and it was McGill that most benefited from the couple’s philanthropy: they founded a museum and a library (both named after the family), endowed a chair in natural philosophy, and donated more than 3,000 books to the library’s collection. Grace had never really liked Canada and had a difficult relationship with her mother-in-law, Peter’s father’s second wife (who was actually Grace’s age since he had married her when she was 19). Grace and Peter returned to England in 1879 and lived the rest of their lives at Chislehurst in Kent but kept in close touch with their nieces and nephews in Montreal. Tragedy struck the family of her husband’s younger brother, John James, whose widow, Ada, and son Clifford were mysteriously shot at the family mansion in Montreal in 1901; Clifford’s sister, their niece Amy, with whom they were close, came to them for comfort. When Amy married her family’s doctor, Thomas Roddick (later Sir Thomas), the celebration took place at Chislehurst.