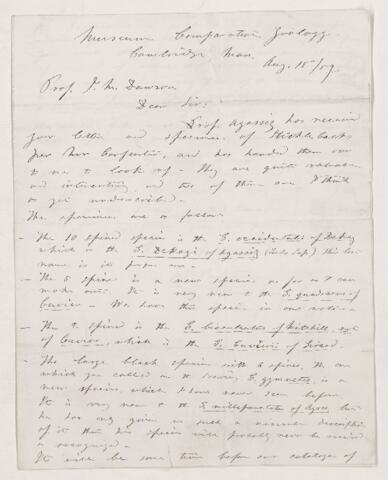 Frederic Ward Putnam was born on April 16, 1839, in Salem, Massachusetts.

He was an American anthropologist and biologist. Entering Harvard College in 1856, he served as assistant (1857–1864) to the naturalist Louis Agassiz. He graduated from Harvard in 1862 and held zoological curatorships before becoming curator of the Peabody Museum of American Archaeology and Ethnology at Harvard (1875–1909). Putnam was one of the first to recognize and examine American archaeological remains, and he directed pioneer field expeditions in Ohio, New Jersey, the American Southwest, Mexico, and Central and South America. He was appointed Professor of Ethnology at Harvard in 1887, and in 1891, he began organizing the anthropological section of the World’s Columbian Exposition of 1893 in Chicago. That collection became the basis of Chicago’s well-known Field Museum of Natural History. In 1894, he began devoting half his time to the curatorship in anthropology at the American Museum of Natural History, New York City and was influential in dispatching the productive Jesup North Pacific Expedition to northeastern Asia and northwestern North America. In 1903, he went to the University of California, Berkeley, to organize both the new department of anthropology and the anthropological museum. Putnam published more than 400 zoological and anthropological articles, reports, and notes and was also a founder and the editor of the periodical American Naturalist. In 1882, Putnam was elected a member of the American Antiquarian Society, and in 1898, he was elected president of the American Association for the Advancement of Science. In 1901, he was president of the American Folklore Society and in 1905, he was president of the American Anthropological Association. He is widely known as the "Father of American Archeology".