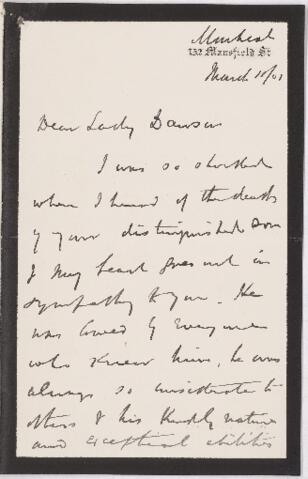 Francis John Shepherd was born in Como, Quebec, and took his medical degree from McGill University in 1873. After further studies in Britain and in Europe, he returned to McGill in 1875 as Demonstrator in Anatomy. In 1879, he joined the staff of the Montreal General Hospital. Shepherd also served as Professor of Dermatology from 1908 to 1913, and as Dean of the Faculty of Medicine from 1908 to 1914. He retired as Emeritus Dean and Professor in 1919. He studied with William Osler who became a lifelong friend. He had three children: a son Ernest who died during WW1 and two daughters, Dorothy and Cecil. Cecil married the architect Percy E. Nobbs.