File contains 18 pages of the articles of agreement for the creation of the House of McTavish Frobisher & Company.

Fonds consists of primarily financial and legal records related to property transfers and the estates of members of the Dawes and Leishman families. It includes land sale deeds, court documents, invoices, receipts, and wills. Business and legal affairs of James P. Dawes, his wife Elizabeth Leishman, and their son Albert F. Dawes are represented in the fonds. Business deals associated with James P. Dawes include with Grand Trunk Railway Company of Canada. Many legal documents in the fonds are related to land holdings and property in Lachine, Quebec.

Part of Patterson and Co. papers

A deed of assignment prepared for the firm Patterson and Co. (represented in Montreal by William Walker, in Quebec by Samuel Hopkins, and in Liverpool by Andrew Todd Patterson and John Michael Malonek). The deed of assignment transfers the ownership of several plots of land in Montreal and Trois-Rivières (including a lumberyard, house, and windmill), a partially-built ship under construction in Trois-Rivières, a quantity of goods and wares (primarily timber, alcohol, and food), and some furniture and property from William Walker, Samuel Hopkins, Andrew Todd Patterson and John Michael Malonek to their attorneys, James McGill, John Richardson, and William Hallowell on behalf of their creditors. The agreement also includes an allowance for William Walker and Samuel Hopkins, as well as funding for a counting house in Montreal. The original agreement is dated 17 April 1811 and was notarized by Jonathan Abraham Gray and Thomas Barron.

Additional signatories were added on 5 and 6 October 1812 (notarized by Henry Griffin): James McGill, John Richardson, William Hallowell, Henry Griffin, Thomas Barron, N.P. as well as the following creditors: George Sellers (represented by his attorney G. Garden, by power of substitution from John Salmon) and Thomas Clark (represented by his attorney Robert Frost per power of substitution from Sam. Hopkins).

Further signatories were added on 11 February 1814 and 22 June 1814 (notarized by E.H. Griffin): William Thompson (represented by his attorney Robert Frost, by power of substitution from William Mager), and M.C. Cowilling (attorneys by substitution to George Srymes attorney to the assignees of Carson, Parry & Co). 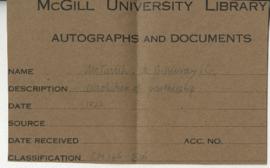 The fonds consists of documents and letters accumulated during the course of Griffin's legal career, including: dockets of the firm Griffin & Sewell, 1833-1875; legal notes by Griffin concerning wills, sales, and mortgages 1850-1876; legal documents of property transfers and marriage contracts 1826-1860; and notes on marine insurance in the St Lawrence 1843-1848. There are as well two notebooks of legal definitions, dating from approximately 1860.

The fonds consist of copies of deeds, some of which concern the British-American Land Co., that were executed by Torrance for the period 1856 to 1861, and a notebook of opinions on Québec legal questions, including copies of letters from the firm Torrance & Morris (1857-1859).

These McGill papers are entirely concerned with his property and estate. They comprise legal documents and copies of letters (some in McGill's hand) concerning his land holdings on St. Paul St., Montréal, in Stanbridge, and in Detroit. McGill's cash book, 1809-1815, and copy by W.D. Lighthall of a deed of conveyance to McGill of some land formerly occupied by the city fortifications, 1805, are also included, as is a blue-print and sketch by W.D. Lighthall of the site of McGill's St. Paul St. house. Estate papers comprise a probate of McGill's will, copied by Alice Lighthall, and his executor's cash book.

About half of Donald's papers consist of diaries giving brief daily records of his professional and sometimes personal activities from 1918 to 1981. The remaining files fall into two series. Essays and addresses, 1919-1962, largely on economic aspects of the chemical industry, were addressed to professional organizations and commercial bodies such as the Engineering Institute of Canada, the Canadian Chemical Association, the Canadian Chamber of Commerce, and the Industrial Development Board of Manitoba. More informal speeches include a radio talk on jobs in the chemical industry, 1938. Personal materials comprise some family, legal and investment records, 1940-1952, and undergraduate essay on medieval universities, 1910, correspondence related to an annuity fund set up by Donald for Jessie Henderson, secretary and librarian of McGill's Chemistry Department (1946-1961), and a file of press releases and congratulatory letters on Donald's receipt of the Chemical Industry Medal, 1952-1953.