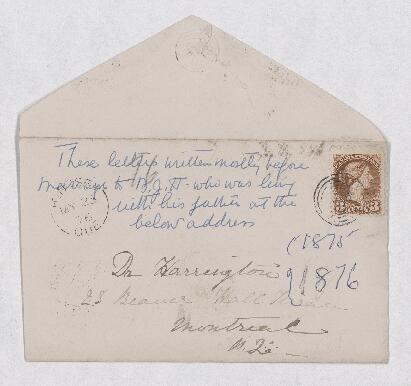 Anna Lois Dawson, born in 1851 while her father was superintendent of schools in Nova Scotia, was the eldest daughter of John William Dawson, principal of McGill University from 1855 to 1893. She was schooled in 1861-1862 at the Establishment for the Education of Young Ladies in Montreal where she learned drawing from Mrs. and Miss Tate and in 1863, at Mrs. Simpson’s Ladies School; drawing and painting were interests considered appropriate for young ladies at the time and she excelled at them, earning first prize at the midsummer exam in 1867. She continued her art lessons in 1873 with a Mr. Bird at an art school in Toronto. She accompanied her mother and father on his first and only sabbatical in 1884 when they travelled to Italy, Egypt, and the Holy Land. In 1876 she married Bernard James Harrington (1848-1907), a chemistry professor at McGill who was a former student of her father’s. Anna bore nine children: Eric, Edith, William, Bernard, Ruth, Clare, Constance, Conrad and Lois. Two of them died young: Eric at age 17 and Edith at age eleven, and much of her time and energy was devoted to care of sickly Eric. Her youngest daughter, Lois Winslow-Spragge, became the first art teacher at Miss Edgar's and Miss Cramp's School for Girls. While her husband stayed in town in the summer, Anna went with the children to Little Metis where they had a cottage next to the Dawson’s house, Birkenshaw. During these summers, she made many sketches and watercolor paintings, giving each a date and title. Many of her landscapes, painted from 1869 to 1914, are in the McCord Museum now.

The rest of the year, the family lived in Walbrae Place adjacent to the McGill campus in a house built for them by her father, until 1893 when her father purchased the house at 293 University (now 3641) and also bought the house next door for the Harringtons. The two families were very close and after Sir William’s death in 1899, a passage was built between the two houses for better communication. She lived there till her death in 1917.

She helped her father with his correspondence especially in his later years and illustrated many of his geological books. After his death, in 1900 she jotted down five pages of notes of memories of her father (among the Anna Dawson Harrington papers in the McGill University Archives, MG 1022, container 64) hoping to enliven the manuscript of his rather impersonal autobiography. However, her younger brother Rankine was determined to publish it as written and it appeared the following year entitled “Fifty years of work in Canada: scientific and educational,” with his editing, sparking a family feud between Rankine and Anna, who was supported by her older brother George. This dispute is well documented in the family’s correspondence preserved in the Dawson Family Fonds in the McGill University Archives.

Envelope postmarked 25 May 1876 for letter sent from Anna Lois Dawson to B.J. Harrington.