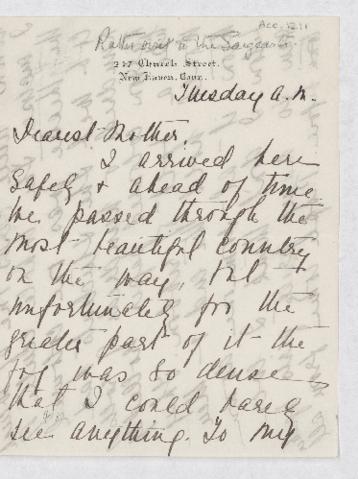 Ruth Minna, born in 1882, was the fourth child of Anna Dawson Harrington (daughter of Sir William Dawson) and her husband, Bernard James Harrington, a professor of chemistry and mineralogy at McGill University. She grew up with her eight siblings in Walbrae Place next to the McGill campus and later at 293 University Street (now 3641), next door to her grandparents. Summers were spent in Little Metis (in the Gaspé) in a summer home very near to her grandparents’ place, Birkenshaw. She married McGill graduate Edward Phillips Featherstonhaugh in 1908, and the next year the couple moved to Winnipeg; her husband had been appointed the University of Manitoba’s first professor of electrical engineering. He spent his first years there organizing the university’s first such department.

Letter from Anna's daughter Ruth regarding her visit to the Sargeants.