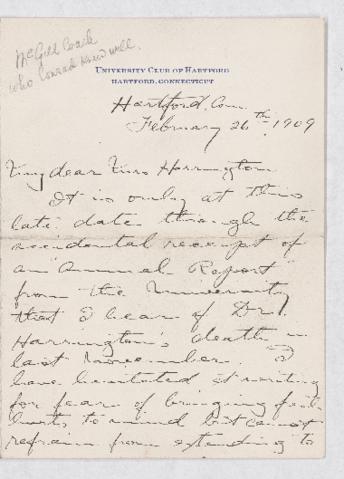 Henri Alfred D. Coussirat was born in 1875 in Orthez, Aquitaine, France. His family moved to Montreal in 1885. He played hockey for the Montreal Wanderers in the 1890s, and was a coach at McGill University. He was a resident of Hartford, Connecticut, and New York City, where he worked as a building contractor. In 1908 he married Fredricher Loew (1883-1971). He died in 1932 in New York City and was buried in Brooklyn.

Letter from Henri Conssret to Anna Harrington, expressing his condolences at the death of B.J. Harrington. Conssret was a McGill coach who Conrad knew well.