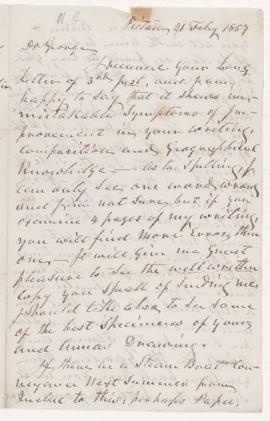 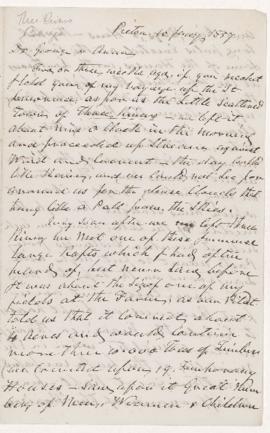 Letter to George and Anna Dawson from their grandfather, written from Pictou, N.S.

George Mercer Dawson's papers comprise professional, scientific and family correspondence, some scientific manuscripts, drawings and photographs of Western exploration, juvenalia, student materials, and poetry. His scientific correspondence (boxes 54-55) commences in 1872, but drops off sharply after the early 1880s. The letters, and his occasional draft replies, document the political and administrative fortunes of the Geological Survey, the North American Boundary Commission, and various learned societies. As well, they report on field research, particularly on mineral deposits, arrangements for equipment and assistants for expeditions, and the exchange of specimens. The correspondents include other members of the Survey, government officials, and business concerns, especially railways and mines. Dawson's scientific manuscripts fall into two groups: notes and reports on Western exploration, geology, mining, and Indigenous communities, 1870-1875, and 5 cm of general lectures on physical geography delivered to the Montreal Ladies' Educational Association, 1880. Closely allied to his scientific and exploratory work are an album of photographs taken in western Canada in 1894-95 (box 70), and about 10 cm of pencil sketches, sepias and watercolors of landscapes, many produced during exploratory trips in 1873-1874, and 1881 (box 59). Materials of a more personal nature include juvenalia (short essays, drawings, and two diaries from 1861 and 1865) and 16 lecture and laboratory notebooks from his student years at the Royal School of Mines, 1869-1872, together with pocket diaries, memorandum books, and notes of geological field trips during the same period (boxes 57-59). Dawson also wrote poetry, of which 10 cm of manuscript is extant (box 56), mostly reflections on states of mind, the Canadian landscape and seasons, and the vanity of human society, endeavour and love. There is also a small notebook of poems and reflections during an European trip in 1882 (box 58). Family correspondence includes 22 letters from his grandfather James Dawson, 1856-1857; 5 cm of letters from J.W. Dawson, 1856-1899; 15 cm from Margaret Mercer Dawson, 1865-1901; 3 cm from Anna Dawson Harrington, 1869-1901; 3 cm from William Bell Dawson, 1865-1899; 2 cm from Rankine Dawson, 1870-1900; and a handful of items from other members of the family.

Other papers primarily concern Dawson's geological interests, and consist of diaries and general notebooks, 1873-1899; miscellaneous articles on geological subjects, 1887-1894; papers connected with explorations in the Yukon and with the Boundary Question between Alaska and British Territory and with sealing regulations in the Bering Sea, 1887-1897; correspondence, 1883-1898; and poems.

Traquair's papers largely concern his work as a lecturer. School of Architecture lectures in architectural history cover the classical, mediaeval and modern periods (ca 1935-1936), while those on architectural ornament are largely devoted to lettering. Miscellaneous lectures, about 30 in number, were delivered between about 1924 and 1937 to various audiences, such as school children, extension students and members of art and architectural associations. They deal with architectural history, architectural principles both aesthetic and social, and other art forms (painting, carpets, heraldry etc.)

Material relating to Traquair's publications includes drafts of about 15 articles on many of the same topics as the lectures described above, and stemming from the same period. A special series of notes and manuscripts, together with some correspondence, illustrates Traquair's research on Québec arts. 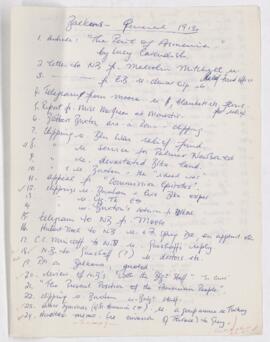 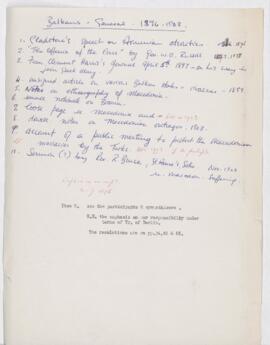 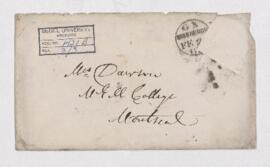 An envelope addressed to Mrs Dawson with a postmark from Edinburgh. 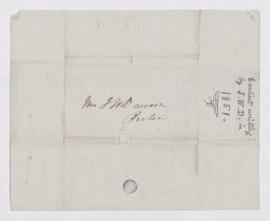 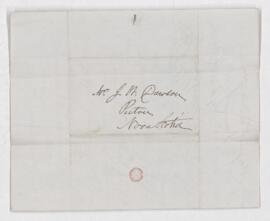 Letter from Peter Bell to Margaret and John William Dawson with congratulations on the birth of a baby boy.