The collection consists of fifteen volumes, primarily manuscript with some printed, containing over 1,300 culinary and medical handwritten recipes, plus numerous loose recipes also mainly manuscript. The documents in the collection originated chiefly from the Doncaster area of South Yorkshire, centred on Hooten Pagnell Hall. Many of the manuscripts and notes are signed by or addressed to Sarah Anne Warde. Series 1 comprises the fifteen bound volumes, two of which are printed works by female authors, while the remaining thirteen are manuscript notebooks. Two of these manuscript notebooks are attributed to Sarah Anne Warde, while one is attributed to Eliza Smithson. The manuscript attributed to Eliza Smithson contains table setting riddles (also known as an enigmatical bill of fare). Loose recipes are found in Series 2. This series consists of approximately 300 culinary, medical, and household recipes dating from roughly the 1780s through the 1850s.

This material comprises a group of official documents, and correspondence among various partners. The official documents include four articles of agreement for partnership between various Montréal companies, largely with McTavish, Frobisher and Co., 1790-1802, and a memorandum on the effect of exchange differences on the partners' shares (approximately 1826). The partners' correspondence, approximately 1792-1808, contains letters from Simon McTavish, Isaac Todd, and Alexander Mackenzie concerning provisions, business agreements and loans. A letter from William McGillivray to Mr Justice Reid discusses family matters. One financial ledger for the North West Company contains business accounts and records transactions. The bulk of entries are dated from January 1810 to November 1825, with some entries dated 1861.

This collection of original documents concerning Protestant education in Quebec was assembled by E.I. Rexford for his history of the High School of Montreal. The bulk of this material dates from the 1830s and 1840s, and includes a 300 page report on the Jesuit Estates, 1839, a summary of educational legislation, 1838, grammar school returns from Canada West, 1842, and a number of surveys and accounts.

Affidavit concerning Bown’s controversy with the Hudson’s Bay Company over the printing by the Nor’-Wester of a petition on memorial dealing with imprisonment of Dr. John Schultz. It is dated 10 July 1868 at St. Cloud Minn. Note: Part of Exhibit A, and all of Exhibits B, C, & D are missing. 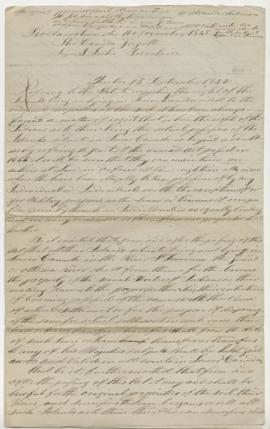 This collection consists of twelve documents concerning the settlement of the Algonquin and Nipissing First Nations at Oka, Quebec, some in Anishinaabemowin, 1831-1853. There are also letters and documents mostly addressed to N. O. Greene, solicitor and a champion of the Indian cause, concerning the Indigenous communities of Oka, 1878-1880.

There is business correspondence, 1792-1800, with letters from among others Alexander Mackenzie, Joseph Frobisher, Alexander Henry, Simon Fraser and Roderick Mackenzie. There are also minutes and resolutions of the Executors of McTavish in a bound volume; and a contemporary copy of the minutes of the executors of his will, 1805.

The collection contains three volumes of manuscripts from an anonymous student of the course of lectures on midwifery by Dr. Thomas Young, dating from 1783. The first volume has three inserts: two pencil portraits of unidentified men and an envelope on which is written a note to Dr. J.A.S. Brunelle. The collection is divided in three file folders.

Collection contains memorabilia relating to Dr. Robert Howard's student life at McGill University and of his career, from 1871 to 1888. Among the items are diplomas, photographs, newspaper clippings, a booklet from McGill University, a frame and a programme.