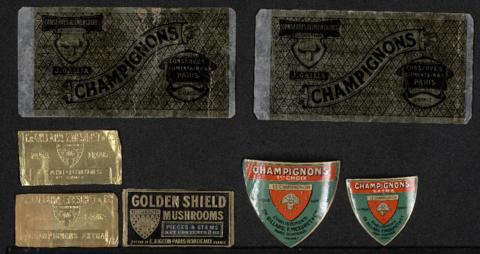 Henri Jonas & Co. was a Montreal firm that specialized in the importation and manufacture of extracts, essences, spices, and luxury food items. The company's founder Henri Jonas was born in Paris, France, and established the business in Montreal in 1870 at 10 De Bresoles St. as a manufacturer of "grocers' sundries." By the late 1880s, the company was also importing international products. By 1888, Henri Jonas was working with a business partner, Jessie Joseph Jr. The company was later based at 389 St. Paul Street in Old Montreal. By 1907, they were established at 139 St. Paul W., where they operated until sometime between 1970 and 1975.

The fonds contains the company's business correspondence related to the importation of food products, essences, and spices from international manufacturers, and other business expenditures, as well as some correspondence with government regulators regarding food labeling and quality. In addition, some letters are from charitable and cultural organizations to which the company donated. Some personal correspondence of Henri Jonas is included, as well as numerous restaurant bills and and menus, including for the Montreal Hunt Club.

Chiefly found is incoming correspondence with product suppliers and invoices for various services, including car repair, advertising, stationary, funeral arrangements, and photography. Suppliers include companies from France, Germany, Norway, UK, Italy, Sicily, Hungary, China, India, and Spain. Products include essential oils, soaps and luxury food products such as sardines, truffles, preserves, jam, Hungarian paprika, Chinese tea, olive oil, caviar, liqueurs, foie gras, sardines, and ketchup. Two Montreal-area manufacturers are represented, with a catalogue from Couvrette Sauriol Limitée (1937) and a brochure for the Stuart Brothers. Included is one letter from postwar France soliciting renewed a commercial relationship following the allied victory (Royal Champignon). There are also bulletins from and correspondence with, including one outgoing letter, the Canadian Department of Agriculture regarding quality and labelling of canned fruits and vegetables.

A few letters are personal in nature and addressed to Henri Jonas himself. There are also telegrams and letters from Canadian organizations such as the Pacific Railway Company, and Canadian societies and organizations to which the company donated money (Canadian Society for the Prevention of Cruelty to Animals, Montreal Orchestra, Hospital for Sick Children London, Salvation Army, McGill University Centennial Endowment).

Some of the company's advertising materials are also found, as well as food labels for products including mushrooms, wine, truffles, olive oil, sardines, and lemonade).

Some items purchased from From Here to Infinity Gallery, August 2018.

English and French, with some German.