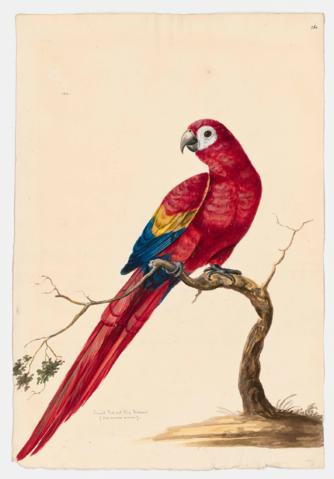 Drawing of a Lesser Antillean Macaw--also known as a Guadeloupe Macaw--from a species that is now extinct. Attributed to Peter Paillou.

Manuscript note on back of drawing: The lesser Red Macaw as big as life

Translation of manuscript note on accompanying leaf: Macao Minor
Ps: Macrourus minor. [The small Macaw] It is the size of a
dove; with a white upper mandible,
black lower mandible, and bare white cheeks;
a scarlet body and tail, blue flight feathers on the wings, and
golden-yellow flight feathers on the tail; a blue abdomen,
and grey feet.
It lives in Eastern India.
The Small Macaw