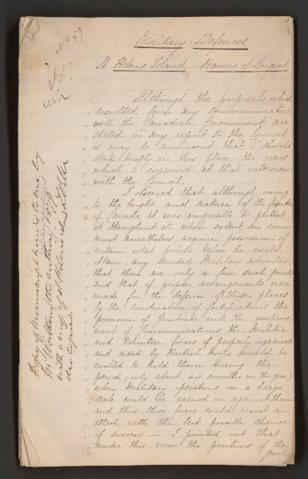 Purchased for Rare Books and Special Collections from Warren Baker, Montreal, in September, 2017.

Collection consists of three items relating to Saint Helen's Island (Île Sainte-Hélène), located southeast of the Island of Montreal in the Saint Lawrence River. The items relate to the island's military installations, built as defenses for the city of Montreal as a result of the War of 1812 and used as a munitions depot for the British Army and later a garrison, arsenal, and military prison operated by the Canadian Army. Items include a manuscript entitled, "Military Defences. St. Helen's Island - Barons of Longeuil," written by Charles Walkem, August, 1873; "Plan of Isle St. Helens," an undated map on linen paper, with a key pointing out the military installations; and "The Fort, St. Helen's Island," a 4-page pamphlet containing schematics and descriptions of the island's fort as well as a history of the island dating from 1611 to the 1960s. The pamphlet cover photograph features a soldier of the Royal Artillery, Saint Helen's Island Fort, circa 1865. Part of the manuscript document also deals with the hereditary Barony of Longueuil.

Note in ink on manuscript: "Copy of manuscript handed to me by Mr. Walkem (the author), 1879, with a map of St. Helen's Island, also copied."

Handwriting inverted on verso of each leaf.