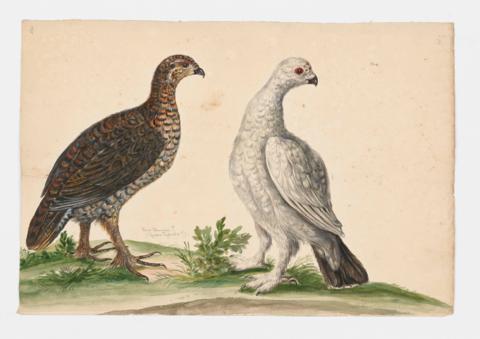 Charles Collins was an Irish painter, known for his portraits of animals and still-lifes. He achieved success in England painting exotic birds, game, dogs and dead game still-lifes. He was the painter for Robert Furber’s ‘Twelve Months of Fruit’ (1732). In 1736 he published in collaboration with John Lee a set of 12 large engravings, coloured by hand, of British birds in landscape and garden settings, entitled Icones avium cum nominibus anglicis. He then came to the attention of Taylor White, who engaged him to paint birds from his and others’ collections until 1743. Collins died in 1744, when he was described as ‘Bird Painter to the Royal Society.’

Manuscript note on back of drawing: one of the birds came from Hudsons bay the other from Newfoundland

Phasianellus
T. with shaggy feet, a wedge-shaped tail,
and three white flight feathers on the sides
of the tail. L.S.N. p.160
It lives in Canada.