File 1 - Observations on commerce of Canada 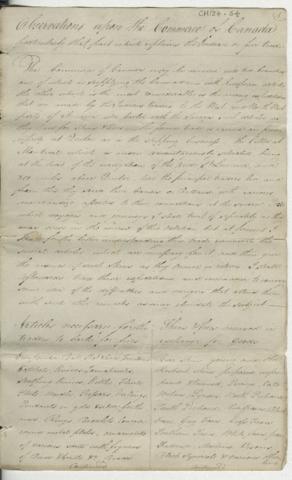 Born in Bonchurch, Isle of Wight, Hadfield moved to America while in his youth. He was, for a while, a cotton merchant. He was a personal friend of James McGill and documented the commercial fur trade in Canada in the late 18th century.

File contains 2 handwritten manuscript copies of the personal writings of Joseph Hadfield and his observations during his time in the fur trade. Hadfield mentions the role of traders making expeditions to the West and North West to barter with Indigenous communities for furs. He describes in detail how voyages were made from Montreal through Lake Ontario and Erie to Detroit by traders. Handfield provides lists of trade goods that he judged necessary for these traders to carry for barter and lists the skins received in exchange for goods. He lists the particular details of one cargo carried by canoe, with quantities and weight and value of goods transported. He also details which geographical regions are good for fur trapping (including Detroit, Michilimackinac, and Grand Portage) and provides pricing information for different types of animal skins, and distances traveled by traders. Includes very brief descriptions of activities of Indigenous community in the Northwest Canada/Detroit region and European fur trader settlements.

Also included the file are two letters written by Hadfield's granddaughter, Miss A. Hadfield, to Dr. G. R. Lomer of McGill University. The letters explain that Miss Hadfield had in her possession these accounts of her grandfather and she was inquiring to their informational value.