Item 2 - Manuscript of In Flanders Fields and Other Poems 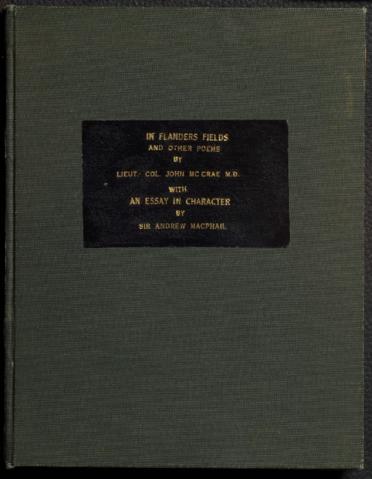 Born in Guelph, Ontario, McCrae was a career soldier and practicing physician. He graduated in 1898 in medicine from the University of Toronto. Before the war, he worked at the Montreal General and the Royal Victoria Hospital, and taught at McGill University. Although McCrae was a trained physician, he joined an army fighting unit at the outbreak of the First World War. There, he experienced some of the first chemical weapons attacks during the second battle of Ypres in Belgium. In 1915, McCrae was ordered away from the artillery to set up the No. 3 Canadian General Hospital (McGill University) at Dannes-Camiers near Boulogne-sur-Mer in northern France. He died there of pneumonia on 28 January 1918.

John Andrew Macphail was born in Orwell, Prince Edward Island, and received his medical degree at McGill in 1891. He became McGill University's first Professor of the History of Medicine in 1907 and occupied the Chair for thirty years. During World War I, he was an officer in the 6th Field Ambulance with the Canadian Army Medical Corps. In 1918, his war work was rewarded by a knighthood.

Transferred 1948 from the McGill Medical Library to the Osler Library.