File 6 - Letters from Napoleon to Alexander 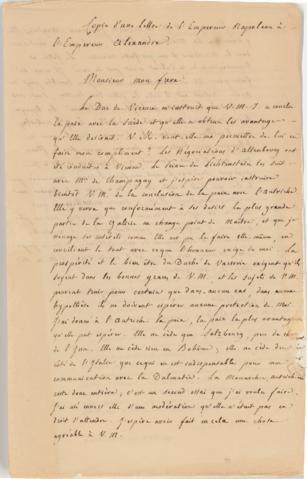 Letters from Napoleon to Alexander

I. (Schoebrunn, 10 October 1809) Acknowledgement of Russia’s recent peace agreement with Sweden. Highlighting the peace settlement with Austria; Napoleon emphasizes his view of the leniency of the agreement. Description of Wellesley’s landing in “le plus terrible pays du monde” (Iberian Peninsula). Mention of the United States’ growing discontent towards Britain and the possibility of a rapprochement between France and the U.S.
II. (19 February 1811) High praise for Caulaincourt and his role as ambassador in St-Petersburg. Napoleon justifies recalling his ambassador for ‘health reasons’ – marking a shift in France’s policy towards Russia in the build up to the Campaign of 1812.
III. (Paris, 6 April 1811) Faced with news of approaching (Russian) divisions to the borders of the Duchy of Warsaw, Napoleon declares he will raise fresh levies. Bonaparte nevertheless claims he wants peace, desires to remain amicable, and assures that he will “never to attack”.
IV. (Vilna, 10 July 1812) Request to transfer Alexander’s correspondence to the King of Saxony. *Note* Letter is misfiled as correspondence between Napoleon and Alexander