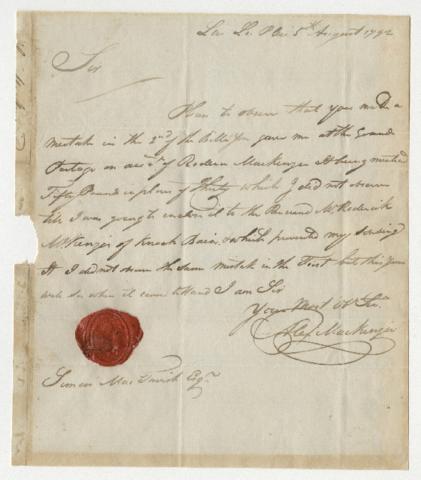 Scottish explorer Mackenzie is best known for his east-west overland crossing of Canada to the Pacific 1793. He was born in Stornoway in the Scottish Outer Hebrides. He sailed for North America in 1774 and was sent to school in Montréal. By 1779, he was worked as an apprentice for Finlay, Gregory & Co., afterwards Gregory, McLeod and Co., and which later merged with the North West company in 1787. He was sent to Detroit in 1784 and to the West in 1785. When the firm was absorbed in the North West Co. in 1787, Mackenzie joined the North West as a partner. He traveled to Athabasca in 1788, leaving on an expedition to try find a northwest passage to the Pacific, reaching the Arctic Ocean. The river Mackenzie that he traveled in now named after him. Mackenzie made an expedition to the Arctic Ocean from Fort Chipewyan in 1789 along the river which now bears his name. His significant expedition in 1792 took him across Canada to the Pacific, using recent advancements in the study of longitude that he had learned in London. In 1793 he journeyed to the Pacific Ocean. In 1790 he severed his connection with the North West Co. and returned to England, where he published his Voyages in 1801 and was knighted in 1802. He returned to Canada in 1802 to become a leading partner in the XY Company. In 1805 Mackenzie was elected to the Legislative Assembly of Lower Canada from Huntingdon County. In 1812, Mackenzie returned to Scotland and married Geddes Mackenzie. He died in Scotland in 1820.