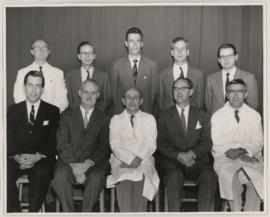 Joseph Graham Stratford was born on September 1923, in Brantford, Ontario to Nora Wallace and Graham Stratford. He was the great-nephew of John H. Stratford, founder of the Brantford General Hospital. Joseph Stratford began his studies in the Faculty of Science at McGill University in 1943. During his studies, he became president of the McGill Osler Society. After graduation from McGill Faculty of Medicine in 1947, Stratford moved to England to continue his medical training at the National Hospital, Queen Square, London. It was here that he practiced as a house surgeon at The Royal Postgraduate Medical Centre in Hammersmith before his return to Montreal, where he completed a residency at the Montreal Neurological Institute (MNI) under Dr. William Cone. Following his residency, he was appointed Clinical Assistant in Neurosurgery at the MNI, Fellow in Neurosurgery at the Montreal General Hospital (MGH), and Junior Consultant in Neurosurgery at Queen Mary Veteran's Hospital. He also gave lectures on neurosurgery at McGill University.

In the summer of 1952, Stratford married Aurelie Forbes, personal assistant to Wilder Penfield. The couple had a son named Huntly, and a daughter named Leslie. The Stratford family moved to Saskatchewan in 1956 where J. Stratford was appointed Professor of Surgery and Director of Neurosurgery at the University of Saskatchewan at the new neurology and neurosurgery unit created by Dr. William Feindel and Dr. Allan Bailey. Stratford later returned to Montreal in the early 1960s to join the Montreal General Hospital as Director of the Division of Neurosurgery at the behest of Dr. H. Rocke Robertson. Stratford participated in the development of a neurological intensive care ward at the McGill-MGH Pain Centre and Palliative Care Task Force. Stratford served as the 1974 President of the Canadian Neurosurgical Society and was a long standing member of the board of directors for the Victorian Order of Nurses. In 2000, he was the recipient of the Montreal General Hospital Award of Merit. Joseph Stratford passed away on July 22, 2007 while visiting his daughter and family in France.

The fonds consists of professional correspondence between J. G. Stratford and colleagues from the MGH, Montreal Neurological Institute, University of Saskatchewan, and the Osler Society. It also includes personal research material on pain (the causes and treatments), original drafts of his various publications (1953-2007), Montreal General Hospital daily journals (1966-1998), and some patient files (1943-1972, file 33). Stratford's bachelors, masters, and medical degrees from McGill University, as well as various professional certificates awarded to Stratford throughout his career are included in the fonds. Additional items include portraits and group photographs from the Neurological Department at Saskatchewan and the Montreal Neurological Institute, several brain scan prints, architectural blueprints of the Montreal General Hospital and Montreal Neurological Institute, as well as letters between Joseph & Aurelie Stratford and their close friends, Wilder & Helen Penfield.