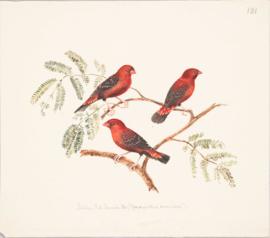 Three small red male birds with black wings. Light grey speckles on the wings and yellow spots on the tail. All three perched on a group of branches with some leaves. Inscription at bottom centre reads, "Indian red munia [males] (Sporoeginthu... 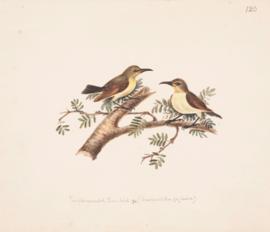 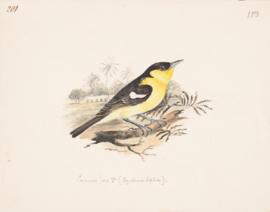 Yellow male bird in breeding plumage, with black back from head to tail, white spot on wing. Sitting on branch in front of landscape in background featuring palm trees and what appear to be stone markers along a road. Inscription at bottom centre ... 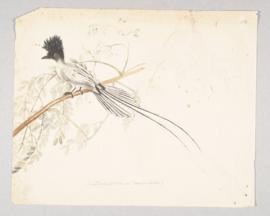 Small bird in its white phase, with black head and tall feathered ridge, white body with some black stripes and long black tail feathers. Perched on thin branch in the top left corner with some light branches, more foliage pencilled in on right si... 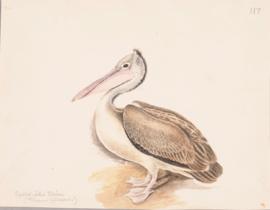 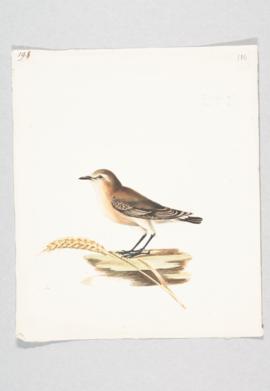 Painting of a brown female bird with a light eye mark and belly, darker back and wings, which also have some light markings. Standing on beige ground with stalk of wheat that extends past the dimensions of the background. Inscription pencilled in ... 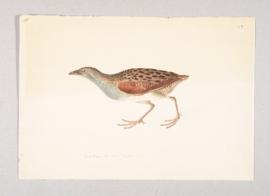 Painting of a short brown bird with light blue streak down face and neck, tan and brown spotted back, copper wing with white spots, leg and under tail with tan stripes. No background. Inscription at bottom centre reads, "Land-rail or Corn-cra... 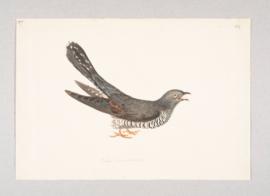 Painting of a long bird with grey head and back, black and white striped belly. Wings and tail are grey with teal, copper, and white accents. Mouth is open, no background. Inscription at bottom centre reads, "Cuckoo (Cuculus canorus)." 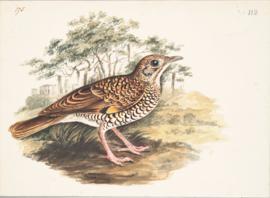 Brown bird with white belly, speckled all over, white throat and faint black circle around eye. Background is well articulated, with natural foreground of plants, trees in the centre background and a temple in the distant left.