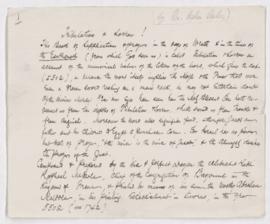 File consists of personal and family correspondence from Esther and Abraham de Sola and their children as well as business related correspondence to both Abraham and Aaron David Meldola de Sola. 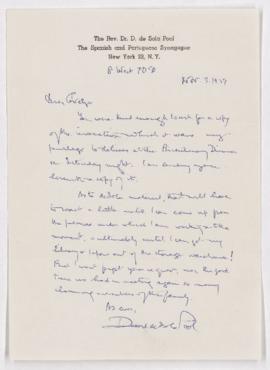 File consists of original correspondence and documents relating or written by the Josephs, Harts and de Solas. There Is some correspondence between Evelyn Miller and David de Sola Pool, Rev. of the Spanish and Portuguese Synagogue of New York. Als...

Consists of letter from Lord Selkirk to Captain Benjamin Walker dated 14 June 1816 concerning the sale of Selkirk’s land at Salmon River, New York, and his impending departure for the Red River. 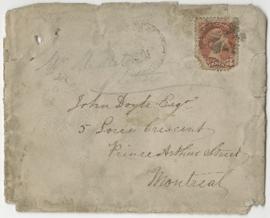 3 letters; 1 envelop; 1 money order receiptLetters: one sent by a J. Middleton to a Mr. John Doyle Esq. (including the envelop) and two incoming from a Mr. Ignatius Donnelly.The letter from Middleton to Doyle outlines Middleton's move to Mont...