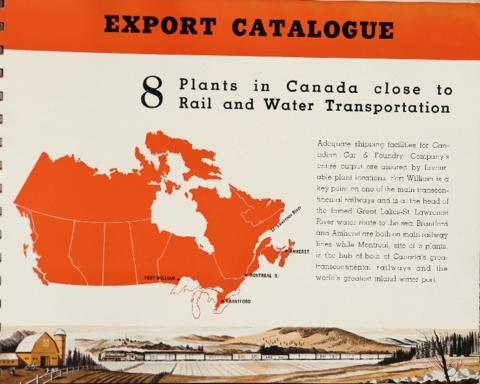 Canadian Car and Foundry Company (also called CC&F and Canadian Car & Foundry) history goes back to 1897, but the main company was established in Montreal 1909 from an amalgamation of several companies and later became part of Hawker Siddeley Canada through the purchase by A. V. Roe Canada in 1957. Today the remaining factories are part of Bombardier Transportation Canada. The company manufactured of buses, railroad rolling stock and airplanes.

The Canadian Car & Foundry was created in 1909 following the merger of the Rhodes Curry Company of Amherst, the Canadian Car Company of Turcot and the Dominion Car and Foundry of Montréal. With a qualified and enthusiastic production team, the foundry quickly established an exceptional track record. In 1938, the company was hired to supply the British Royal Air Force and the Royal Canadian Air Force with Hawker Hurricanes, which played a pivotal role in winning the Battle of Britain. The company became the largest aircraft manufacturer during the Second World War, producing more than 2,300 fighters. In 1942, it was contracted to produce SB2C Curtiss Helldivers, which were used by the United States Navy during the War in the Pacific.
As male enlistment increased during the war, the Canadian Car & Foundry hired and trained a greater number of female employees. Representing the wartime contributions of women who left traditional ‘female’ occupations to work in the public sphere, the female workers in the factory took on welding, precision drilling, riveting, sub-assembly of instruments and inspection. These technical contributions and changes in labour trends were guided in part by the aeronautical engineer Elizabeth Muriel Gregory ‘Elsie’ MacGill, a person of national historic significance, who oversaw the company’s first original design for the Hawker Hurricane. The period saw women gain valuable skills and confidence, earn financial independence, and helped to demonstrate that women could do non-traditional jobs.
After the war, the demand for aircraft dropped exponentially. The Canadian Car & Foundry eventually found a niche in the manufacturing of large transportation equipment, including logging equipment, buses and highway trailers. In 1955, it began producing subway cars for customers around the world, which it continues to do under the current ownership of Bombardier Transportation of Montréal.

Source: Historic Sites and Monuments Board of Canada, Minutes, 2008.