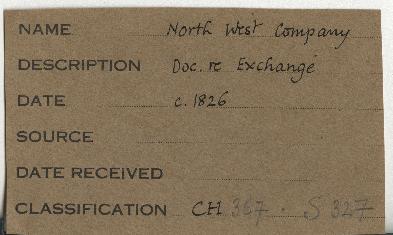 The North West Company was a fur-trading organization formed over the course of the first decades following the British conquest of Canada. It was not a chartered company like the Hudson's Bay Company, but a syndicate of a number of individual fur-trading firms. Later, however, it came to be dominated by the Montréal partnership of McTavish, Frobisher and Co. (later McTavish, McGillivrays and Co.). Although there are references to a North West Company as early as 1776, the first documented union of interests was a 16-share concern formed in 1779. However, a new agreement drafted in 1783 is commonly considered to have inaugurated the Company. The expansion of the North West Company's trade was rapid: in the person of Alexander Mackenzie, it reached to the Arctic Ocean in 1789 and to the Pacific in 1793. After 1812, the Company faced intense competition from the Earl of Selkirk, who had acquired a controlling interest in the Hudson's Bay Company. Although the North West Company defeated Selkirk in the courts, its financial position had deteriorated by 1820, and in 1821 it was absorbed by the Hudson's Bay Company.

File contains 1 document outlining the financial responsibilities of each partner of the North West Company from 1804 to 1813, the problems of bill exchanges in England during and after the War of 1812, and the financial disputes which occurred after the absorption of the NWC into the Hudson's Bay Company.