Item 01 - Crime on the road Malaga-Almeria 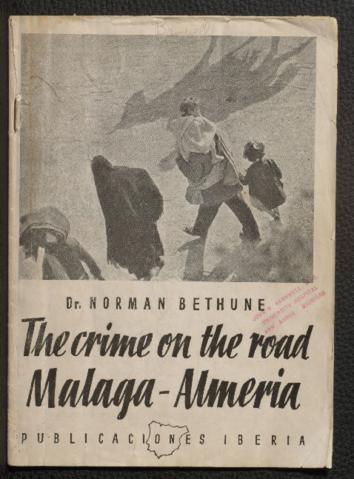 Crime on the road Malaga-Almeria

Henry Norman Bethune (1890-1939) was born in Gravenhurst, Ontario. Bethune was a medical student at the University of Toronto in 1914 when WWI began and he went to France as a stretcher bearer in1915. Resuming his studies after a shrapnel shell blast wounded his left leg, Bethune graduated with an MB from the University of Toronto in 1916. In 1917, Bethune returned to Europe as a surgeon sub-lieutenant in the Royal Naval Canadian Volunteer Reserve and later the Royal Navy. In the years after the war, Bethune completed post-graduate studies at West London Hospital and at the Royal College of Surgeons of Edinburgh. Bethune's grandfather (who was also called Norman) was the founder of Toronto's third medical school, the Upper Canada School of Medicine, and was a major influence on Bethune as he started out in medicine.

In 1926, Bethune entered a dark period of his life – diagnosed with tuberculosis (TB) and estranged from his wife Frances Penney. It was his recovery from TB that inspired his interest in thoracic medicine. After his convalescence at the Trudeau Sanatorium in Saranac Lake, New York, he moved to Montreal and began working as an assistant to Dr. Edward Archibald of the Royal Victoria Hospital – a leading authority on tuberculosis. Over the next few years, Bethune became famous for his treatment of TB patients at both the Royal Victoria Hospital and the Hôpital du Sacré-Coeur. From 1928-1936, Bethune perfected his skills in thoracic surgery, and also invented and redesigned more than a dozen surgical instruments including rib shears and a pneumothorax device.

Increasingly disillusioned with the general state of medical practice, Bethune advocated for change in the healthcare system. In 1936, he volunteered to help the Loyalists in the Spanish Civil War, where he organized the first mobile blood-transfusion unit. Two years later, Bethune traveled to China where he provided aid to the Chinese communist Red Army by forming the first mobile medical unit. In 1939, while stationed with the Communist Party of China's Eighth Route Army during the Second Sino-Japanese War, Bethune injured his finger while operating on a soldier and died of blood poisoning.