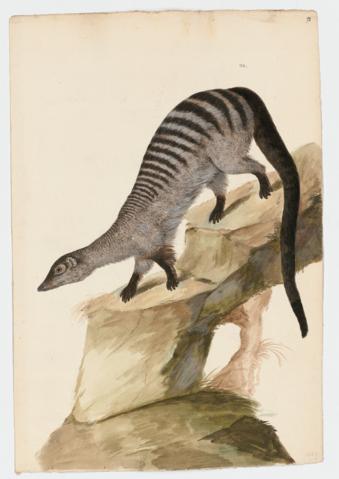 Translation of manuscript note on accompanying leaf: Mammalia Ferae Viverra
Ichneumon.
Mustela Glauca [The grey weasel]
amen acad p. 109
Mustela Viverra indis Mangutia Kempf. amoen.
574. t 576
Quil 1. quirpele Carc. arom. 162
Serpentielda s. muncos Rumpf. herb 7. p. 69
t. 28 f.2.3
Ichneumon Indicus Edwd av. 199 t.199
Ichneumon s. Vulpecula Zeilanica seb. mus 1. p66
t.41. f.1.
It lives in Egypt near the banks of the Nile; and
in nearer India. It is tame, in the manner of a dog,
it feeds on amphibians, snakes, lizards,
crocodile eggs, frogs, chickens, and mice.
It is an enemy of snakes; when bitten by a snake
it eats ophiorrhiza; it crawls and springs out at
its prey; it is afraid of the wind; it is a clean animal,
it often kills cats.
Description