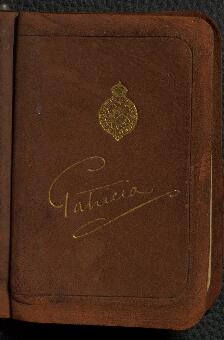 7 cm of textual records and photographs

Director of the McGill Observatory from 1922 to 1943, Albert J. Kelly, was well-known to the public as weatherman and also as timekeeper for the nation's railroads and many of its industries. Born in Edmonton, he graduated from McGill University with his B.Sc. in 1911. He joined the staff at McGill University in 1912 as assistant to the Prof. C.H. McLeod, both at the observatory and in the department of surveying and geodesy. He later served as Assistant Professor of surveying from 1919 to 1929, as Associate Professor from 1930 to 1943, and as chairman of the Department of Surveying and Geodesy form 1940 to 1943.

Apart from some personal and obituary materials, Kelly's papers concern his career as an infantry officer in Princess Patricia's Canadian Light Infantry during World War I. A pocket diary records his experiences in 1918 and a copy of a photograph album shows scenes around Mons in 1914. Printed souvenirs, Christmas cards, certificates and medals supplement these documents. Other photographs show Kelly and his family, and the McGill Observatory.