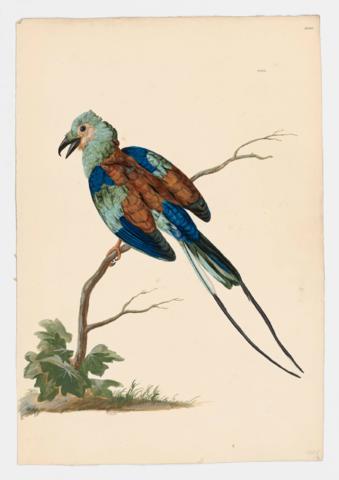 Drawing of an Abyssinian Roller from a 18th century specimen [modern geographical distribution: Sub-Saharan Africa North of the Equator.] Attributed to Peter Paillou.

Manuscript note on back of drawing: Corvus paradisi maximus

Translation of manuscript note on accompanying leaf: Aves Picae Corvus
Ornatus
Corvus virides, with a reddish-brown back,
wings that are blue at the base and tip, two very long flight feathers
on the sides of the tail,
and a lead-coloured beak. The head, neck, breast, and abdomen
are green: with pale yellow patches around the eyes and a
pale yellow throat. The back is reddish-brown as are the
inner flight feathers on the wings near the body;
the wings are green in the middle,
with blue shoulders and
primary feathers. The rump is blue.
The tail is bluish-green,
and is as long as the body: with two flight feathers on the sides
of the tail (one on either side) that are twice as long [as the
rest] and are black from the outside to the middle.
I believe it lives in Ceylon.