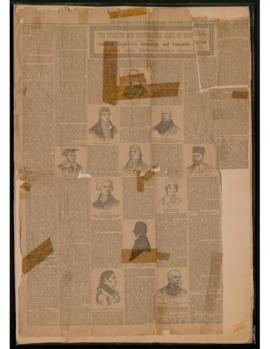 Abraham de Sola's correspondence relates to his work as reverend of the Shearith Israel (Montreal) synagogue; Professor of Oriental Languages at McGill University; and as a lodge member of the Ancient Jewish Order of Kesher Shel Barzel, to which he gave his name to its first Canadian lodge in 1872, the De Sola Lodge no. 89. There is extensive correspondence relating to the lodge as well as other lodges in the order, the majority located in the United States. The correspondence relating to Abraham de Sola's professorship at McGill University includes a number of letters from Principal William Dawson.

The correspondence in the fonds related to David Aaron Meldola de Sola focuses on his assuming the position of Reverend of the Shearith Israel (Montreal) Synagogue upon his father's death in 1882, and Includes a number of handwritten and printed sermons given to the congregation. The correspondence and documents relating to Clarence Isaac de Sola focuses mainly on his role as the president of the Federation of Zionist Societies of Canada from 1899 to 1920. This includes sermons, conference proceedings, as well correspondence between Clarence Isaac de Sola and the leader of the Zionist movement, Theodore Herzl.