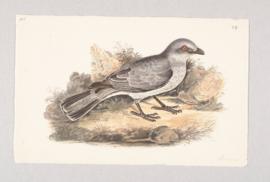 Painting of a grey female bird of varying shades, darker on the back and lighter on the front and belly. Detailed background around the bird, with rocky outcrops and varied foliage. Inscription, "Lanius" pencilled in lower right corner.

File consists of letters dating from 1882.

File consists of 26 letters, including both professional and family correspondence, dating from 1881. 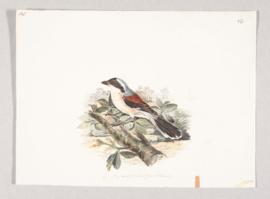 Painting of a small, colourful bird with black face mask, blue head cap and orange back, light peach chest and belly, and black wings and tail. Perched on branch and closely surrounded by foliage with some distant trees in the background as well a... 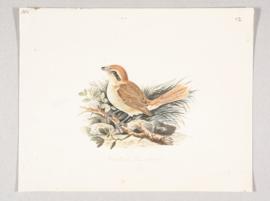 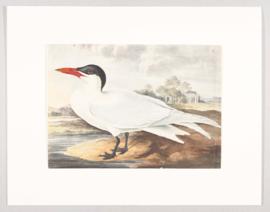 Mounted painting of a white tern with black cap and feet, orange beak. Standing on sandy ground with water, palms, and mountains in the receding background on the left side, and a temple surrounded by trees on the right side. 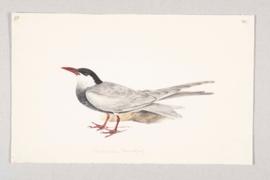 Painting in matte frame of a white and grey tern with darker bib and black headcap. Orange-red beak and feet. No background other than the suggestion of a beige rock and ground under the bird's body. Inscription below painting reads, "Wh... 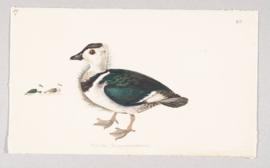 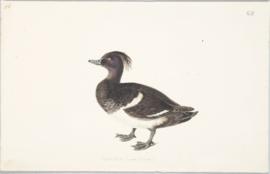 Painting of a small black and white duck with purple iridescence on the cheek and a fluffy black tuft of feathers on the head. Inscription at bottom centre reads, "Tufted duck (Aythya fuligula)." 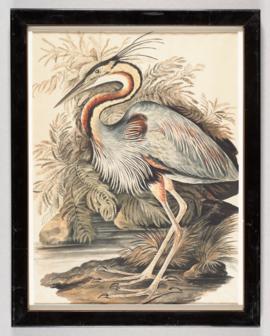 Framed painting of a large heron standing by a river. Black cap on top of head, long neck with cream, orange, and black markings, light blue feathers on body with orange and black undertones. Foliage and leaves fit around the body.