Virtually all the Logan papers concern his scientific work. A small percentage relates to the affairs of his family, and to memorials to Logan after his death. The great majority of the papers consists of scientific correspondence from about 1820 to 1874, but mostly for the years following his appointment to the Survey in 1842. The letters deal with the collection, exchange and description of geological specimens, expeditions under the aegis of the survey, problems of research and scientific interpretation, scientific meetings, and visits by scientists. The number of correspondents, both individuals and learned societies, is very large, but the most substantial bodies of letters are from J.W. Dawson, geologist and Principal of McGill University, James Hall, palaeontologist of the New York Geological Survey, Alexander Murray, Logan's chief assistant, and James Lowe of Grenville, Québec, who supplied Logan with specimens and appears to have been casually employed by him on surveying jobs and field trips. Other correspondents include Sanford Fleming, E.D. Ashe of the Québec Observatory, Thomas Sterry Hunt, and R.I. Murchison of the Geographical Society of Great Britain. Some letters pertain to political or social affairs, but usually in close connection with the scientific work of Logan or the Survey. These files contain copies of some of Logan's outgoing letters, as well as some letters addressed to other individuals, generally his assistants. Other scientific papers consist of field trip records (a journal kept during an expedition in 1845, a weather table kept on Lake Superior in the winter of 1846-1847, work records and astronomical readings for surveying projects, notes on mineral deposits, and lists of specimens), manuscripts of three scientific papers, as well as "Observations on the proposed Geological Survey", and manuscript and printed maps and geological schemata, including some by Logan of the Bay of Fundy, Labrador, and Hamilton, Ontario regions. Manuscript catalogues of specimens were prepared by Logan for the Paris Exhibitions of 1855 and 1867. Official reports include Logan's annual reports for 1842-1844, an overview of the work of the Geological Survey, 1866, two reports by Logan on prospects for mining on the north shore of Lake Superior, 1846, 1847, and one on mineral deposits around Rivière du Loup, 1853, as well as Logan's copy of his proposed Geological Survey Bill, 1844, and some copies of reports on mining and cartography prepared by others. Logan's financial records include expense accounts for Geological Survey expeditions, as well as other professional expenditures, such as books. His private and family life is reflected by a very brief diary of an Atlantic crossing in 1856, letters to and from his brothers James and Henry, his father, his uncle Hart Logan, and Hart Logan's partner John Fleming, covering the years 1772-1856. There are also baptismal and burial certificates, and legal documents, particularly bills of sale pertaining to James Logan's farm. Memorials to Logan after his death include J.W. Dawson's correspondence concerning the Logan Memorial Fund and Collection, 1881, and a manuscript biography by Alexander Murray. There is a chronological and author/recipient index to these papers. 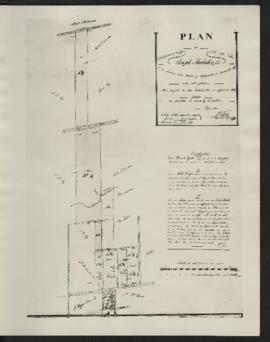 The bulk of Gill's papers concern his consulting work for the mining industry and for government. Only two small files relate to his teaching career. Gill's work as mining consultant is documented by 124 maps, 48 designed by Gill himself, showing structural geology of various regions in eastern Canada, and mineral deposits of gold, iron, zinc and molybdenite, not only in Canada, but also in the Malartic gold fields in Peru (1929-1968). The papers also contain his report on iron ore in Labrador (1929) and two reports by W.F. James and J.E. Gill to the Newfoundland government, assessing prospects for gold in the Rainbow and Kayak Concessions, Labrador (1933), areas prospected by R.B. D'Aigle, see his papers, Section IX: Professions And Trades. IX). Three field notebooks record summer research expeditions (1935, 1947-1948). Three reports by Peter Eakins, a former student of Gill, describe the Malartic mine (1951, 1955-1956); there is also a report by Eakins on the Wasa Lake Goldfield (1950), and one by J.B. Gilliatt on the Wabana Iron Mines (1949). Gill also raised a file of correspondence and reports on Newfoundland mineral resources (ca 1955-1969). Finally, there are two boxes of petrographic slides, one with laboratory reports, a box of mineral samples collected for the Québec Ministry of Mines, and 4 photographs of mining concerns with which Gill was involved. His teaching activities are reflected by a file of plans, reports and memoranda on the organization of the Geology Department Map Library (1959-1969) and an outline with some draft chapters of a student's thesis (1969).

Apart from administrative, office and project records, the fonds also contains records that relate to Harold Spence-Sales professional activities outside of his work as an architect and urban planner. For example, awards and honors that he received and records related to his involvement in architectural and urban planning associations. Additional professional activities include: his involvement in creating exhibitions, curating architectural-themed magazines and periodicals as well as copies of publications that he worked on solo and in collaboration with John Bland.

Collection consists of an illustrated manuscript containing a map and brief guidebook to Paris landmarks, created by Nicole Allardet probably during the 1940s or 1950s. The item is inscribed to Vivienne Horne. A folded booklet on heavy grey paper, the guidebook contains twelve panels, ten of which feature a gouache illustrated vignette of a Paris landmark and a short handwritten description in white. The landmarks include the Jardin du Luxembourg, Opera House, Eiffel Tower, the river Seine, the Bois de Vincennes, Notre-Dame de Paris, the Jardin des Tuileries, the Champs-Élysées, Montmartre, and the Luxor Obelisk in the Place de la Concorde. In the centermost two panels is a simple map of Paris showing the landmarks depicted.

The collection consists of reports and plans for urban and rural areas from all provinces of Canada dating from the late 1950s to the 1990s. Most of the material consists of plans and reports for future land-uses that are revised, usually every decade. It also includes regulations for these areas, such as zoning. Some reports deal with sectorial policies such as housing, transportation, conservation, or environmental protection.