Apart from administrative, office and project records, the fonds also contains records that relate to Harold Spence-Sales professional activities outside of his work as an architect and urban planner. For example, awards and honors that he received and records related to his involvement in architectural and urban planning associations. Additional professional activities include: his involvement in creating exhibitions, curating architectural-themed magazines and periodicals as well as copies of publications that he worked on solo and in collaboration with John Bland.

The collection consists of reports and plans for urban and rural areas from all provinces of Canada dating from the late 1950s to the 1990s. Most of the material consists of plans and reports for future land-uses that are revised, usually every decade. It also includes regulations for these areas, such as zoning. Some reports deal with sectorial policies such as housing, transportation, conservation, or environmental protection. 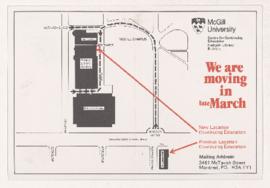 The bulk of Gill's papers concern his consulting work for the mining industry and for government. Only two small files relate to his teaching career. Gill's work as mining consultant is documented by 124 maps, 48 designed by Gill himself, showing structural geology of various regions in eastern Canada, and mineral deposits of gold, iron, zinc and molybdenite, not only in Canada, but also in the Malartic gold fields in Peru (1929-1968). The papers also contain his report on iron ore in Labrador (1929) and two reports by W.F. James and J.E. Gill to the Newfoundland government, assessing prospects for gold in the Rainbow and Kayak Concessions, Labrador (1933), areas prospected by R.B. D'Aigle, see his papers, Section IX: Professions And Trades. IX). Three field notebooks record summer research expeditions (1935, 1947-1948). Three reports by Peter Eakins, a former student of Gill, describe the Malartic mine (1951, 1955-1956); there is also a report by Eakins on the Wasa Lake Goldfield (1950), and one by J.B. Gilliatt on the Wabana Iron Mines (1949). Gill also raised a file of correspondence and reports on Newfoundland mineral resources (ca 1955-1969). Finally, there are two boxes of petrographic slides, one with laboratory reports, a box of mineral samples collected for the Québec Ministry of Mines, and 4 photographs of mining concerns with which Gill was involved. His teaching activities are reflected by a file of plans, reports and memoranda on the organization of the Geology Department Map Library (1959-1969) and an outline with some draft chapters of a student's thesis (1969).