Documents related to Pappius’s participation in and organization of symposia, conferences, and other academic events.

This series relates to William Feindel’s administrative roles at Acadia University where he served on the Board of Governors and as the University’s Chancellor (1991 and 1996). Materials include correspondence and minutes of the board.

The accounting series consists of three account books detailing different financial dealings and assets of the Natural History Society of Montreal. The accounting details are varied, one being the treasurer’s ledger of income and expenses kept by Treasurers James Ferrier Jr. and E. E. Shelton (file 13.7); another showing closing account balances for 1905, 1914, 1915, and 1916 and sales clippings for properties: 52 University Street Property, 152 & 154 Drummond Street Property, and the 365 Mountain Street Property Diagram of the property of the Natural History Society (file 15.1); lastly an address book shows an alphabetical list of assets and their value, as well as a note in the front tracking “Field Day” surpluses and deficits from 1882-1890 (file 16.3).

The series consists of records created in the fulfilment of the Zoological Society’s mandate and goals to host events, trips, speakers, and to donate to and support worthy causes. This includes event and project planning records with related financial documents and reports, guest lists, communications to members, and correspondence. A large part of this series is concerned with the Society’s whale watching excursions and their whale conservation efforts. These files include an annual pamphlet called Whales Alive! = les Baleines!, flyers, newspaper advertisements and published articles, all promoting whale watching field trips. Others include donations, correspondence, and financial documents relating to issues surrounding conservation. Other types of activities covered in this series are field trips (primarily around Quebec but also a few internationally), film screenings (known as theatre nights), art shows, fundraisers and lectures. The field trips and some events of the Society are documented in 5193 photographs stored in 24 photo albums (1989-2009). Apart from events, projects undertaken by the Society are included, such as their efforts to build a wildlife park in Montreal’s West Island, the conservation of owls, lynxes, birds, turtles and flowers, and their wildlife pavilion at Man and His World.
There are large gaps in the Activities series. The Society’s founding project, the Montreal Aquarium and Dolphin Arena, and their proposal for an ark at Expo ’67 are only included briefly in these records. For more information on these projects, see the Administration series files MSG1164.c5.f11, f12, f13. Also, there are few photos documenting the Society’s activities before 1989.

The series consists of letters from family and friends of Robert Abraham.

Approximately 40 volumes of addresses given between 1939 and 1967 to audiences both within and outside McGill cover a wide range of educational and social topics. Press releases, obituaries and messages (e.g. for Old McGill) are included. The unbound addresses cover James' pre- and post-retirement years. The first category is largely concerned with education, including McGill history. This category also contains information files used for preparing speeches. The post-retirement category focuses on broader subjects, such as the nature of the university and the work of OXFAM. 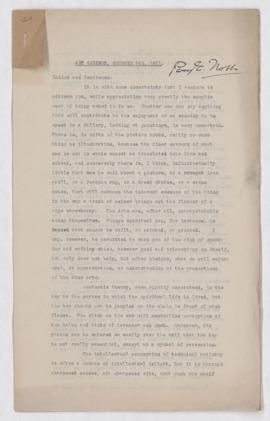 Manuscripts and typescripts of forty-seven articles, addresses, reports and papers on art, architecture and related topics, some of which were published.