This file contains miscellaneous documents including three copies of McGill Guide to Student Services, three copies of announcement of PGSS ski trip, memo about meeting of the Students' Society of McGill University, blank "Residence Room Damages" form, notice to all McGill clubs and societies, announcement of workshop given by the Centre for Developing-Area Studies, and a job posting for exam invigilators.

This file contains material related to resistance against the Vietnam War, including notices about a demonstration and a teach-in about Vietnam, as well as a letter calling for support from McGill professors from the McGill Moratorium Committee.

This file contains a promotional booklet and annual report for French Canada Studies Programme. Includes information about the program, list of instructors and research projects, and financial aid opportunities.

This file contains "Dissent," a flyer encouraging students to join the Progressive Conservative Student Federation and advocating for freedom of protest on Canadian university campuses. 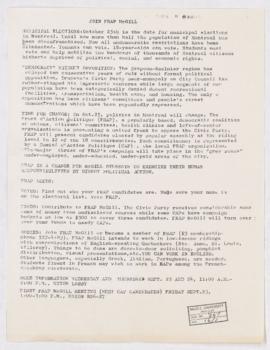 Flyers and posters for events

This file contains flyers and posters for events, including dramatic productions, musical performances, religious services, and social events. All documents related to events held at McGill, except for Centaur Theatre program. 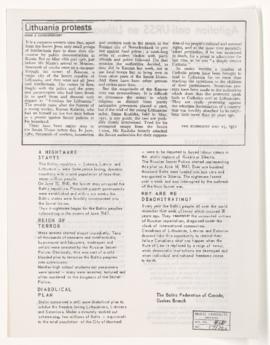 This file contains a pamphlet about the coming appearance of the comet Kohoutek, including religious and political predictions such as the destruction of the United States.