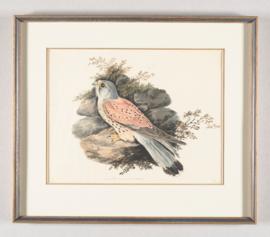 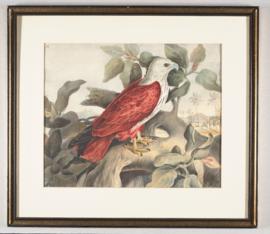 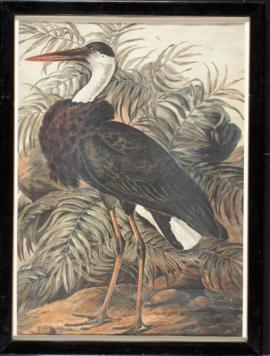 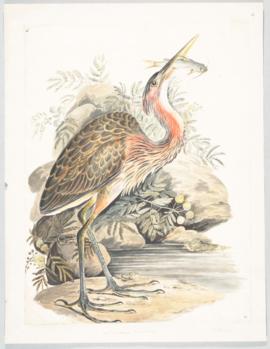 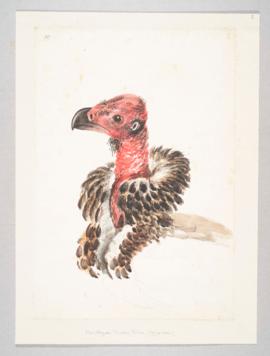 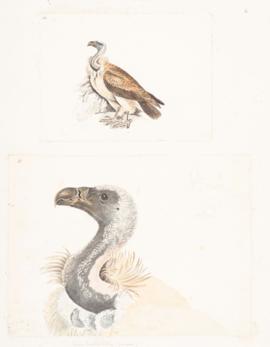 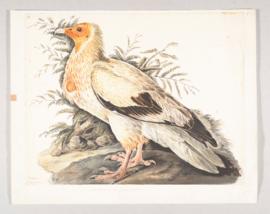 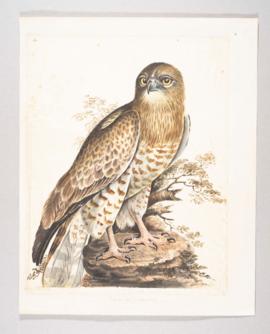 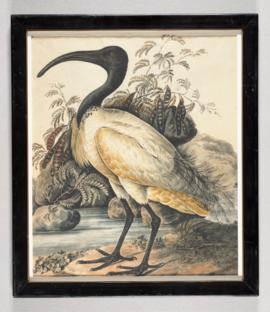 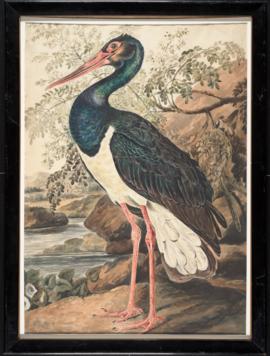 Hereford-born Lady Elizabeth Gwillim (née Symonds) was an artist whose watercolors of Indian birds preceded John James Audubon’s bird paintings by about twenty years and are equally detailed and natural. Married in 1784 to lawyer Henry Gwillim, who was knighted in 1801, she accompanied her husband to Madras, India (modern-day Chennai) that same year, together with her younger sister, Mary Symonds. Following the defeat of Tipu Sultan in 1799, which secured South India for the ‘Company Raj’, Henry took the position of Puisne Judge in the Madras High Court. Elizabeth and Mary were prolific letter writers and their correspondence with family and friends in England (now in the British Library MSS Eur C240) includes descriptions of Indian culture and British life in India. During her six years in India, Elizabeth painted some 200 works, many life-sized. As well as birds, she also painted botanical subjects. Elizabeth Gwillim’s drawings of birds have been compared to those of her near contemporary John James Audubon (1). Her botanical drawings were also praised in Curtis’ Botanical Magazine (Sims 1804), which noted the ‘unusual elegance and accuracy’ of her work. Elizabeth Gwillim studied botany with the eminent Madras botanist Dr Johann Rottler (1749-1836), who named a magnolia after her, Gwillimia. She used her garden as an experimental farm, testing delicate northern plants like parsley, mint, thyme and strawberries (the quintessential English fruit) in the damp heat of Madras, and collecting seeds of the local flora for commercial nurseries in Fulham and Brompton. She was hailed as ‘the patroness of the science in that Presidency’ (Sims, Botanical Magazine, 1807), an acknowledgement of her role in an enterprise whose study has to date focused on male botanists like Roxburgh and Heyne. Gwillim died in India at the age of 44 of unknown causes.

Mary Symonds was born in 1772 in Hereford, England, and is known as an artist and letter-writer. In 1801, she accompanied her older sister, Lady Elizabeth Gwillim, the bird artist, and Elizabeth's husband, Sir Henry Gwillim, to India (modern-day Chennai). Both sisters wrote home often about their activities, with vivid descriptions of daily life in India, as well as commentary on Indian culture. Mary particularly enjoyed the many social invitations of British life in Madras during the Company Raj. Like her sister, Mary also painted and some of her works, including those of fish, are part of the works donated by Casey A. Wood to the Blacker Wood Collection at McGill’s Rare Book Library. After her sister died in 1807, Mary and her brother-in-law sailed back to England. In 1809 Mary married John Ramsden, captain of the ship on which she had returned from India.

The drawings in the collection were acquired in 1924 by Casey A. Wood, who established the Blacker Wood Collection. He recounts the story of finding the drawings from a London dealer: “After a search in his cellar among much half-forgotten stock, he brought out a parcel containing about thirty small (10 x 14 in.) mounted and coloured drawings of Indian Fishes.” Some of the watercolours were signed “E.G.”. The dealer also possessed a portfolio of flower drawings, with an inscription on a separate page: “Elizabeth Gwillim, Madras, 1800-1806.” Finally, the proprietor located “an immense, dust-laden, but extremely well made portfolio about five feet broad and four high … [that] must have weighed thirty pounds.” This portfolio contained 121 paintings of birds. Wood acquired the lot for £76. The three portfolios were preserved in the Blacker Wood Collection; some of the bird paintings were framed for exhibitions in the 1930s, and the original portfolio bindings were discarded. The paintings were exhibited in 1975 at the Royal Ontario Museum and subsequently in 1980 at the Robert McLaughlin Gallery in Oshawa, Ontario and the Smithsonian Institution in Washington.

The collection contains 164 botanical and zoological paintings created chiefly by Elizabeth Gwillim as well as possibly by her sister Mary Symonds while living in Chennai, India (then Madras). The collection includes 121 watercolours of birds with inscriptions, 31 watercolours of fish, and twelve of flowers, drawn from life rather than specimens. The paintings reflect the sisters' time in Madras during which, as artists and letter writers, they created a substantial visual record of the landscape and inhabitants of Madras and environs. The paintings also reflect Gwillim's scientific pursuits, including her study of botany.