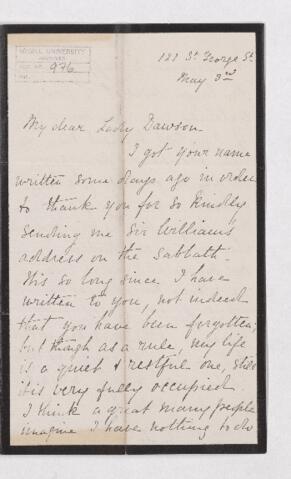 Jane Sybil (or (Sybel) Wilson was the younger daughter of archaeologist and ethnologist Sir Daniel Wilson. Born in Edinburgh, she and her family moved to Canada in 1853 when her father took a position as professor of history and English literature at the yet-to-be-built non-denominational University College in Toronto before it became a part of the University of Toronto. She and her sister Jessie grew up in Toronto in academic circles. Their father became increasingly well known, a member of many scholarly institutions, and in 1888 he was knighted for his education work in Canada. He was named president of University College in 1880, and ten years later became the first president of the University of Toronto which had become united with Ontario’s denominational colleges under the Federation Act.