Fonds consists of photocopies of speeches delivered at Scott's 70th birthday celebration dinner (1969) and of notes for his courses in Admiralty Law and Maritime Law and Carriers (ca 1940) can be found here. The microfilmed copies of Scott's papers are divided into two series. Series One, 1919-1958, contains only that material written or collected by Scott before 1958 and it is completely integrated in terms of his political, legal and literary activities. Series Two was created in 1959 when he moved to a new office in the Faculty of Law. This series contains material primarily originating from 1959 to 1978; however, some material has been brought forward from earlier files for use or review in relation to more recent activities. Also included are microfilmed copies of his scrapbooks, 1924-1974, documenting Scott's career since the 1920s. Two audio cassettes record Scott’s memorial service, which was held on February 18, 1985.

Fonds consists of manuscript essays spanning the years 1847-1903. They comprise his inaugural lecture on pericarditis, reminiscences of early days of the Medical Faculty, several discussions of homoeopathy, and papers on vaccination, the registration of the causes of death and other topics. Eleven volumes of his manuscript lectures "On women's medical problems" are also included.

Fonds consists of a corrected typescript of The Power and the Glory: an outsider looks at biology," as well as copies of an article and three other speeches.

The fonds is composed of correspondence; course material; drafts of articles, books and other works; financial and judicial records, such as benefits statements or contracts; material written for public addresses, such as speeches or notes; photographs of Mr Watson; and a short section focusing its attention on the various appointments he had. This fonds is particularly interesting for the shear amount of course material that one can find here. Indeed, it composes a good third of the entire volume of this fonds and spans 20 courses over 40 years of teaching.

While attempting to give a complete look at William Watson’s life, the fonds is distributed into the following 5 series:
A. Biographical records
B. Professional records
C. Distinctions
D. Correspondence
E. Graphical material

This file contains textual material related to Sir Wilfrid Laurier centenary. Includes essay "Sir Wilfrid Laurier and Lord Minto" by H. Pearson Gundy, a letter to Dr. Lomer, and a speech "Address to be given by Honourable C.G. Power, Minister of National Defence for Air, at McGill University."

This file contains textual material related to Sir Wilfrid Laurier centenary. Includes an address by the Right Honourable W.L. Mackenzie King, newspaper clippings, and an issue of the McGill Daily (Vol. XXI, No. 36).

This file contains text of a talk about Sir William Dawson by John F. Cornell of the History and Philosophy of Science Program at McGill University. Note on the front reads, "deposited 10 June 76."

This file contains text of a talk about Maude Abbott, given to the James McGill Society by McGillett, according to a note on the first page. 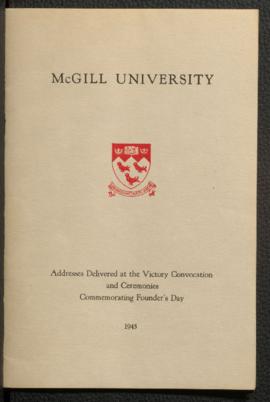