The file contains documents relating to the use of Anaesthesia at the Montreal Neurological Institute, particularly reports and correspondence to and from Wilder Penfield. This includes reports or correspondence which has been copied for Penfield&...

The file contains mailing lists for reprints, extra pages for a reprint book and rejected pages. The material is for either the first or second foundation volume.

Material concerning the "Sussex", an English Channel passenger steamer on which he was travelling in 1916 and survived a torpedo attack. Material includes:; - A manila envelope containing 11 photographs of the Sussex, as well as 1 illust...

A framed and signed photograph of a violin player. While the dedication is not completely legible, the photograph is signed "Saskatoon, 1959."

9 Photographs and 1 illustration for 1991 display

The file contains selections made by William Feindel for a 1991 exhibit. This includes 9 photographs of snapshots of Wilder Penfield's life and 1 illustration of the right lateral lobe of the brain. 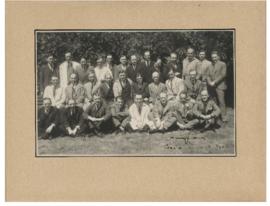