Letter to William Osler from Arthur Robertson Cushny, 8, Upper Park Road, Hampstead, London, England. Thanks for a copy of Withering's Botany which Osler sent him. Mentions a paper that he will give at the Historical Section.

Letter to William Osler from John George Adami, Pembroke House, 133, Oxford Street, London, England. He had a talk with Macphail. To his surprise, he finds out that the latter is not favourable to the establishment of a C.A.M.C. Journal at the present moment. Indicates that Macphail is a pessimist and is affected by the present state of affairs. Details Macphail's opinion, to help preparing Osler for a meeting with him. Sends him an obituary notice of dear old Girdwood received from Ruttan. 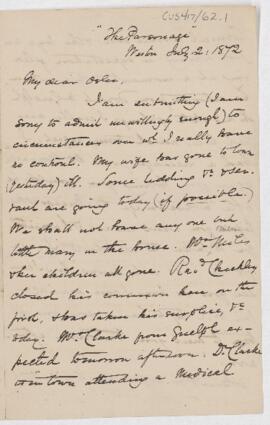 Letter to William Osler from W.A. Johnson, "The Parsonage", Weston, Ontario, Canada. Johnson cannot get away to see Osler, as Checkley and Clarke are both away from the school. He sends a copy of "Devout Life" for Osler's sister (Chattie?). He had a copy of "Religio Medici" for Osler, but gave it away.

Letter to William Osler from A.R. Neligan, British Legation, Tehran, Persia. At the request of Sa'eed Khan, Neligan sends a copy of "Kannash" by Avicenna. Neligan describes the effects the war has had on Iran and writes of medical cases.

Letter to William Osler from John George Adami, Pembroke House, 133 Oxford Street, London, England. Returns him some reprints, a copy of the Report of the Committee of Sixteen at Montreal, and Harrison's "Management of Venereal Disease in the Civil Community". Report of the National Council meeting. Bassett Smith, Goodwin, Morant, Francis Lloyd, Mrs. Scharlieb and other important people were there. Barlow told him how the National Council had been blocked at every turn by Keogh, Bonar Law, and the Local Authorities. Adami suggested Barlow publish the information for the whole country. Barlow said that he would consult Sydenham, but was very mad at the meeting. Adami states his position in this matter. Thinks that Young and Snow were excellent. Mentions Worthin's figures. Adami thinks that they should get Klotz to discuss the matter.

Letter to William Osler from Simon Flexner, The Rockefeller Institute for Medical Research, Oxford, Oxfordshire, England. The next Congress of Physicians and Surgeons is to be held in 1919. He is the President of the Congress and has among his duties to induce Osler to come for the Congress. Details about the date and the possible cities where the congress could be held. Mentions that the chief concern of everyone is that Osler should attend the congress. Asks him if he could. Allusions of the welcome he would have. Civilities.

Letter to William Osler from John George Adami, Pembroke House, 133 Oxford Street, London, England. Suggests that his "Policy of the Ostrich" paper would make a perfect pamphlet for the public. Asks Osler's opinion on the matter and if he has any desire to do propaganda work by pamphlets. Mentions his difference of views with Osler's in the matter of prophylactic treatment. 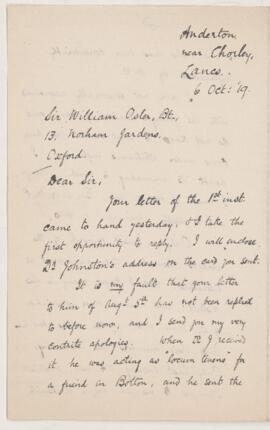