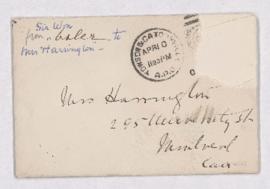 Letter from Sir William Osler in Baltimore, written to Anna Harrington with condolences on the death of her brother.

Fonds shows Dr. Philip Franklin's relations and activities with Sir William Osler regarding the Post-Graduate Scheme in England and the American Hospital in England during WWI. The fonds contains letters, telegrams and an agenda and printed m...

Fonds contains two admission cards of Harry C. Cunningham for the year 1883, one for the course of Microscope in Medicine signed by Sir William Osler and one for a six month ticket to the Montreal General Hospital.