This file contains correspondence to and from William Bentley from the Comptroller’s Office and A.P. Glassco from the Bursar’s Office regarding the requisition, payment and accounting of funds granted to Wilder Penfield, specifically in setting up... 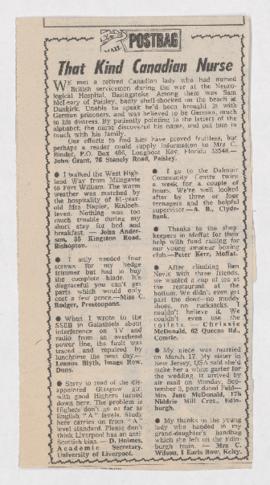 The file contains 3 xerox copies of letters each to E. Flanagan from W.V. Cone and C. Russell plus one newspaper clipping ‘That Kind of Canadian Nurse’ from the Sunday Post, Edinburgh, Scotland, September 16 1984.

This collection is divided into material either by, or about, Wilder Graves Penfield. The material was collected by Lewis in order to write his biography. The fonds also includes materials associated with Mr. Lewis' writing of the biography.T...

The file contains further data from the Jackson Fmaily and copies of letters from the 1930s discussing the patent and blueprints for the family's bone drill.

The file contains newspaper reports about the Montreal Neurological Institute Third Foundation, a pin and empherma. Folder 1 of 2.